“Esther’s Story: The Family God Created” from Christian Faith Publishing author P.K. Thomas is a powerful story of faith and trust in God. When Esther, along with her husband Anthony and adopted son Nymes, set out for Macedonia, they embark on an expedition intending to bring the Word of God to Anthony’s family, however, when unexpected devastating natural disasters strike, these events not only change the course of their journey, but also the lives of those they encounter. 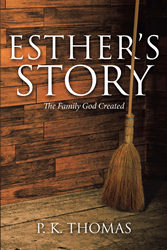 “Esther’s Story: The Family God Created”: shows how the Lord sometimes puts obstacles in one’s intended path that will lead them to the one He has chosen, but this can only happen if one is open to listen to Him and choose to go His way. While fiction, the events depicted in this story can and do happen to people today. As it did in 1972 to P.K. Thomas, after she attended Bible College and saw her priorities and life goals change. Since graduating from the University of Arkansas in 1990, God has been directing her life to serve Him through the talents and skills He has given her.

In her first book, “Esther’s Story: Journey from the Cross”, P.K. Thomas brought the first century birth of Christianity alive by blending Biblical truth, and human history as seen through the eyes of one young girl on her journey of faith to find God’s purpose for her life.

“As Esther’s story continues in her second book, ‘Esther’s Story: The Family God Created,’ we will follow this now young woman, along with her husband, Anthony, and their adopted son, Nymes, on their intended mission to bring the Word of God to Anthony’s mother’s family in Macedonia. However, a journey that was expected to be only a few months takes an unexpected turn when a massive earthquake changes their plans and direction, putting them on a long detour filled with many hardships and difficulties. Despite these many obstacles and hardships that God has put in front of them, they push on. Unsure as to when or if they will reach their intended destination and if they do, what will they find?

“Facing these many obstacles requires a bending of their wills and a testing of their faith in order to make the right Godly choices to meet both the physical and spiritual needs of others. But what at first appears to be just a series of unrelated encounters turns out to be much, much more as they discover God’s hand at work and see His greater purpose through all the difficult choices that they will make.”

Published by Christian Faith Publishing, P.K. Thomas’ new book reads like a movie as one moves from scene to scene and sees the development of not just Esther’s family, but the family of God. In this beautiful narrative, the reader will learn that the greatest dangers and the greatest joys are found not in the obstacles one faces, but in the decisions one makes in dealing with them. Just as the characters in this book, everyone must face their challenges with faith and trust in the Lord.

View a synopsis of “Esther’s Story: The Family God Created” on YouTube.

For additional information or inquiries about “Esther’s Story: The Family God Created,” contact the Christian Faith Publishing media department at 866-554-0919.