“ShiNoKage: Death's Shadow” from Christian Faith Publishing author Jesse Henson is a riveting novel about bravery and determination in a tale of a young man who is about to go against the very person who taught him to fight the enemy. 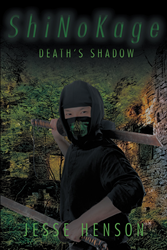 “ShiNoKage: Death's Shadow”: a terrific fight of one man’s lifetime as he weighs between his decisions of revenge or saving the world from impending harm. “ShiNoKage: Death's Shadow” is the creation of published author Jesse Henson, a twenty-nine-year-old small-town writer. He was diagnosed with autism and struggled in school, but he figured out how to use his disability to help master the writing world and have a deeper love for the tradecraft.

Henson writes, “A young man who was born in feudal Japan, Koga-Ryu Province begins learning Ninjutsu and the art of the dragon. When a village raid by the Black Dragon who are Iga-Ryu Province, secretly disguised as Americans, happens, the young man’s life becomes changed forever. As both his parents are taken from him. On that dreadful night, he moves to America after his training is finished to find the group who murdered his family. Only to discover an old enemy whose name had long been forgotten. Also thrown in the mix, he learns his Sensei and grandmaster is still alive but plotting to destroy the world by unleashing an ancient evil. Should he continue his personal vendetta to destroy every member of the Black Dragon? Or try and stop the very one that trained him from ending all life as we know it?”

Published by Christian Faith Publishing, Jesse Henson’s new book is a gripping saga fit for readers young and old, tracing the long, winding journey of a trained warrior whose past continues to haunt him as he sets his goal of revenge in American domain.

View a synopsis of “ShiNoKage: Death's Shadow” on YouTube.