“A Soldier’s Reward” from Christian Faith Publishing author Joe Barrett is a short but intimate autobiography that chronicles the author’s experiences of God’s grace and protection during his duty in the US military and later on in law enforcement. 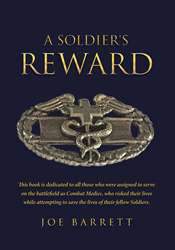 “A Soldier’s Reward”: a moving testimony of faith in the battlefield of life, is the creation of published author Joe Barrett, a native of East Tennessee raised in one of his grandfather’s farms. He is a retired police lieutenant who has served as a combat medic for the US troops in Korea in the 50s.

Barrett writes, “Raised on a farm with its back-breaking work, I thought there ought to be a better way to make a living. One day I happened to pass by a recruiting office, thought this could be it. These men don’t have to get up out of bed at three a.m. every morning. At this point, I joined the military. I became a combat medic and was sent to Korea. I was under the command of General Douglas MacArthur, general of the Army. One day, my group of men was ambushed and there were heavy casualties.

“During a period of a lull, I jumped into a jeep alone and headed out for a tour of the area. I found myself in a Chinese enemy camp. This unusual situation gave me a unique experience during the war.

“Uncertain of what was going to happen, after my discharge from the military, I went into law enforcement and retired after thirty plus years as a Lieutenant from the Reno, Nevada, Police Department. Having been involved in numerous gun battles, I was again under the protection of my Lord and Savior, Jesus Christ, who granted me my final ultimate reward, a place in eternity, my heavenly home. Hallelujah!

“Uncertain of what was going to happen, after my discharge from the military, I went into law enforcement and retired after thirty plus years as a Lieutenant in Reno, Nevada Police Department. Credit is given to Jesus Christ who has delivered me from many dangerous situations and granted me my final ultimate reward, a place in eternity, my heavenly home. Hallelujah!”

Published by Christian Faith Publishing, Joe Barrett’s new book is an uplifting, candid, and thought-provoking work that sees the big picture in the small details of life wherein God resides, looking out for his faithful.

View a synopsis of “A Soldier’s Reward” on YouTube.

Consumers can purchase “A Soldier’s Reward” at traditional brick & mortar bookstores, or online at Amazon.com, Apple iTunes store, or Barnes and Noble.

For additional information or inquiries about “A Soldier’s Reward”, contact the Christian Faith Publishing media department at 866-554-0919.