John Eudy’s newly released “At the Water’s Edge: Salvation on the Banks of the River Styx” is a fast-paced tale of redemption for a former Roman soldier

“At the Water’s Edge: Salvation on the Banks of the River Styx” from Christian Faith Publishing author John Eudy is a compelling follow-up novella that takes readers on a journey of discovery and salvation. 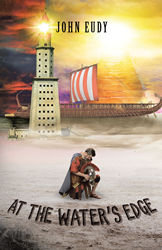 Eudy shares, “In this sequel to A Glorious Day in Hell, Cælius—a Roman legionnaire—learns about the one true God from Ioannes on their journey to Jerusalem. After his friend is killed on the battlefield, he goes through a conversion of heart. This conversion not only leads to God but to a change in his military status. He leaves the legion to become a sailor in the Roman Navy.

“Over the next couple of years, Cælius achieves a small amount of peace as he sails the Mediterranean Sea. When his ship Pax makes port calls, he discretely visits local rabbis who teach him more about God. Unfortunately, some of his shipmates take notice of the changes in his demeanor, behaviors, and port call activities; they become suspicious of him. His faith is revealed and tested during a storm off the coast of Cyprus, where he gives his life trying to save his shipmates. Cælius later wakes to find himself floating down the River Styx into hell.

“What happens to him there? Can he evade the demonic raiders and underwater monsters seeking lost souls? Does he find his friend Ioannes? Will he, too, witness the appearance of Christ, or is he too late?”

Published by Christian Faith Publishing, John Eudy’s new book is a satisfying follow up the author’s previous work, “A Glorious Day in Hell.”

Eudy presents a tale of God’s grace and determination in providing salvation to all who accept the gift.

Consumers can purchase “At the Water’s Edge: Salvation on the Banks of the River Styx” at traditional brick & mortar bookstores, or online at Amazon.com, Apple iTunes store, or Barnes and Noble.

For additional information or inquiries about “At the Water’s Edge: Salvation on the Banks of the River Styx,” contact the Christian Faith Publishing media department at 866-554-0919.