K.L. Smith’s newly released “The One Who’s Not With Us” is a stirring novel that follows the love story of a teenage couple

“The One Who’s Not With Us” from Christian Faith Publishing author K.L. Smith is a captivating account designed to teach readers to put their trust in God’s plan no matter what happens. 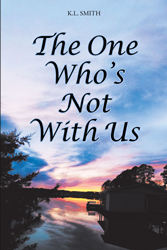 “The One Who’s Not With Us”: a heartfelt fictional story that tells how a couple deals with guilt, regret, emptiness, and loss. “The One Who’s Not With Us” is the creation of published author K.L. Smith, an author who has worked as a registered nurse in several North Carolina hospitals for twelve years. She is a woman who enjoys the beauty of Lake Gaston and the company of her family.

Smith writes, “‘The One Who’s Not with Us’ is a fictional novel that tells the love story of a teenage couple. It was 1965. The Vietnam War was in full swing. Enola and Shane dated for a couple of months before he received his orders for Vietnam. They were deeply in love. The couple spent Shane’s last night in town together. They let their passion for one another get out of control. By the pond under the stars and a full moon, they came together for the first time. That one time connected them forever.

“The couple wrote to one another. When Enola found herself pregnant, she had nowhere to turn. Her parents followed a strict religion, and Enola knew they would not accept her pregnancy. In 1965, an unwed mother was looked upon with disdain by most of society. She thought about telling Shane but decided against it. He was in a war zone, and she felt that he was dealing with enough stress without her adding any more concerns to his life. After all, the couple made no commitments or promises to one another before Shane left.

“Enola’s son was adopted to a good couple in a loving home. She closed her heart to love and moved to Raleigh, North Carolina, for a fresh start in life. Enola severed all ties with her family and quit writing to Shane. She closed the door to her past and moved forward in life.

“Ten years later, Enola is serving her second enlistment as an army nurse. She thought she had carefully buried her past until she came face-to-face with Shane. Enola confessed the past to Shane. The story tells how the couple deals with guilt, regret, emptiness, and loss. They learn to trust in God’s plan for their lives and accept his many blessings as they are granted.”

Published by Christian Faith Publishing, K.L. Smith’s new book provides life-changing lessons to readers and allows them to realize that great things happen when they know how to trust God’s process and plans.

View a synopsis of “The One Who’s Not With Us” on YouTube.

Consumers can purchase “The One Who’s Not With Us” at traditional brick & mortar bookstores, or online at Amazon.com, Apple iTunes store, or Barnes and Noble.

For additional information or inquiries about “The One Who’s Not With Us,” contact the Christian Faith Publishing media department at 866-554-0919.