“Following Jesus’ Daily Footsteps: The four gospels combined in chronological order” from Christian Faith Publishing author Karen Miller is an easy-to-follow guide to understanding and navigating scripture in a clear and informative approach. 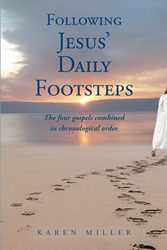 Miller shares, “The phrase ‘It is a God thing’ is often used today. Karen says she senses God’s presence daily but doesn’t regularly use that phrase. With this book, however, she is deeply aware that it really is a God thing from beginning to end starting back in 1968 when she was a new child of God and received a Bible with the J. B. Phillips paraphrase. She wanted to read of Jesus’ daily activities but could only combine the Scriptures for each activity. She didn’t know how to put them in chronological order until discovering her husband’s Harmony of the Gospels book. She has combined the Gospels and put them in chronological order and hopes it will be helpful to others."