“Scofield's Notes” from Christian Faith Publishing author Kathy Beardsley shares a critical look at the contents, messages, and wisdom contained in the Bible's Book of Daniel and Revelation. 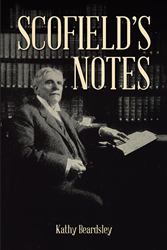 “Scofield's Notes”: a deep dive into two of the Bible’s most popular books that will bring a closer perspective to those who wish to gain clarity and understanding on what they both hold. “Scofield's Notes” is the creation of published author Kathy Beardsley, a woman with a burden to contend for her faith by reintroducing the truth formerly supplanted by foreign doctrine.

Beardsley shares, “Mentored by James H. Brookes, a dispensationalist, Cyrus Ingerson Scofield not only followed in his footsteps, but created a foundation for his own interpretation of dispensationalism. That interpretation along with his commentary on various Scripture passages came to be known as Scofield’s notes, which were placed within the pages of the King James Version of the Bible. Titled Scofield’s Study Bible (previously Scofield’s Reference Bible), it became a best-selling Bible in a relatively short period and continues to hold a solid standing as one of the favorite Bibles to be purchased. The escalation of prophecy news, sales in movies and books with that same message, and the steadfast loyalty to the rapture and tribulation theory are largely due to Scofield’s notes.

To keep it short and sweet, the majority of the focus is concentrated on breaking down the Scripture passages in the books of Daniel and Revelation—two of the books alleged by Scofield and his followers to contain eschatological prophecies yet unfulfilled. It will be clearly shown how easily one can be confused by the seemingly logical explanations Scofield provides, why his interpretation of Scripture is so dangerous, and why it is important to study for oneself.”

Published by Christian Faith Publishing, Kathy Beardsley’s new book is a gripping examination of the Scriptures. Both books are said to contain prophecies that have yet to be fulfilled in the present day and have been widely used to get a gauge of the future.

For additional information or inquiries about “Scofield's Notes,”, contact the Christian Faith Publishing media department at 866-554-0919.