LG - E. Andrews’s newly released “The Empress’s Desire” is a great novel about knowing oneself, ruling the land, protecting the people, and embracing one’s truest desire.

“The Empress’s Desire” from Christian Faith Publishing author LG - E. Andrews is a brilliant narrative about two individuals who have lost and found each other throughout the tribulations of cultural conflicts, domestic wars, and doing what’s good for the people. 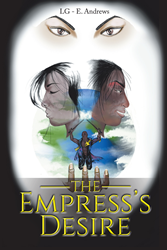 “The Empress’s Desire”: a potent tale about grasping the adversities of love on one hand and ruling an empire and holding its fate on the other. “The Empress’s Desire” is the creation of published author LG - E. Andrews, a Psychology graduate who was raised in a Christian home. Despite the struggles, he sees the beauty of life as well as the importance of loyalty, dedication, and faith to himself, others, and his goals.

Andrews shares, “An Wei and Apophany, inseparable as children, were forced into adulthood along vastly separate routes. Apophany, an empress through forced marriage, and An Wei, an orphan through politically motivated killings. An Wei escapes through the valiant efforts of his father while Apophany must bear the foreboding pressure of leading her new empire as a figure head.

“An Wei, finding solace only within the beautiful memory of the smile of his best friend Apophany, obtains direction for where he wants his life to conclude, beside his best friend. Fortunately for An Wei, the emperor passed away as a result of his desire for the adrenaline-filled life of warrior legends.

“Not wanting to lose his chance, An Wei ceases the moment to thrust himself back into Apophany’s life. Surrounded by political edicts, traditional avenues, and cultural bias, An Wei understands that the only way to get to his Apophany is through the shadows created by his family. An Wei soothes the mind and spirit of Apophany while honoring her request for him not to reveal his identity.

“With war breaking out and Apophany showing signs that she still lacks the strength to help make a change in her empire, An Wei sets out to give her as much time as she needs. An Wei enlists to defend the empire. Apophany, soon understanding what her truest desire is, searches for An Wei. Apophany and An Wei, through unforeseen events, now must decide on the course of their native empire as An Wei now stands before Apophany, an empress, as an emperor. With the fate of the land in their hands, they are forced into mortal combat.

“Apophany must decide between what is truly important in her life and, subsequently, the lives of her people, traditions created generations ago, or through the steady advancement of empowerment for all. And Apophany must decide quickly as she finds herself, yet again, torn between mortal combat, fear, and her truest desire.

“‘It is a sensual adventure of how passionate love for oneself and one’s people is gained and lost before being rekindled through the trials of cultural conflict and domestic war.’”
Published by Christian Faith Publishing, LG - E. Andrews’s new book captures an extraordinary creation that will draw the readers into a beautiful yet complicated story of knowing who and what to put first before everything else.

View a synopsis of “The Empress’s Desire” on YouTube.

Consumers can purchase “The Empress’s Desire” at traditional brick & mortar bookstores, or online at Amazon.com, Apple iTunes store, or Barnes and Noble.

For additional information or inquiries about “The Empress’s Desire,” contact the Christian Faith Publishing media department at 866-554-0919.