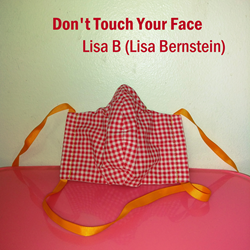 With a take on the COVID quarantine that manages at once to be funny, wistful, anxious, evocative, and even sexy, “Don’t Touch Your Face” features Lisa B’s signature mix of original spoken and sung vocals, which alternate between poetic rap and a catchy sung refrain.

“Don’t Touch Your Face,” the new single from singer-poet Lisa B (Lisa Bernstein), captures a range of pandemic-inspired moods in a timely track that’s both hooky and hip.

With a take on the COVID quarantine that manages at once to be funny, wistful, anxious, evocative, and even sexy, “Don’t Touch Your Face” features Lisa B’s signature mix of original spoken and sung vocals.

The vocals alternate between poetic rap and a catchy sung refrain. They unfurl seamlessly over a chill instrumental bed by Lisa B’s longtime collaborator composer-engineer James Gardiner that combines organic and industrial flavors in a slinky groove.

Fittingly for the pandemic, Lisa B and Gardiner collaborated remotely from their Oakland, California, homes - Lisa B in her cozy house and Gardiner at his Pajama Studios. Having made seven albums together, they were in instant synch with each other.

They worked via Facebook Messenger video calls and sharing music files by email. Lisa recorded her spoken verse and harmony vocals totally a cappella on her phone, and Gardiner created the instrumental track and mixed the final tune in the studio, with Lisa producing online. Gardiner instinctively composed a track that matched the tempo of Lisa’s one-take spoken verse. They then added the chorus and fashioned the layered vocals.

“Don’t Touch Your Face” (Piece of Pie Records) emerges close on the heels of Lisa B’s fall 2019 album "Reverberant: Poems & Music" (both also on Piece of Pie Records) and her previous "I Get A Kick: Cole Porter Reimagined" (Jazzed Media, 2018.)
.
Grounded in jazz, Lisa B has defied traditional strictures on jazz vocalists throughout her two-decade musical career. Her work spans both original songs and reimagined standards, traditional jazz rhythms and soul-jazz grooves, classic Great American Songbook form and pop verse-chorus structure. She often powerfully interweaves spoken and sung verse, drawing on her parallel career as a published poet (with a book from Wesleyan University Press, poems in 60+ publications, and grants from California Humanities and the National Endowment for the Arts, among others).

The new single is a return to the creative groove tunes featured on Lisa B’s 2009 “The Poetry of Groove” and her debut “Free Me for the Joy.”

All seven of her full-length records received critical acclaim and widespread radio play in jazz, college, and other formats.

She has performed at more than 90 venues in the San Francisco Bay Area, New York, Los Angeles, and elsewhere.
Composer-engineer James Gardiner brings to “Don’t Touch Your Face” the fruits of his recording experience with such chart-topping groove-based artists as Beyonce, Destiny’s Child, En Vogue, Digital Underground, and Tony! Toni! Toné!, in addition to his engineering and producing work on countless other records, including two Grammy nominations.

See https://lisablisabernstein.hearnow.com/ for links to “Don’t Touch Your Face” on various platforms.

Contact Cary Goldberg at cary@gomediapr.net or Lisa B at lisabmusic@hotmail.com for more information.