Michael J. Lindsay’s newly released “The Nephilim’s Revenge: A Murder Mystery and End-Times Saga” is a compelling tale that reveals end-time prophecies from the Bible

“The Nephilim’s Revenge: A Murder Mystery and End-Times Saga” from Christian Faith Publishing author Michael J. Lindsay is an intriguing account inspired by the author’s forty-plus years of forensic experience as a police officer. 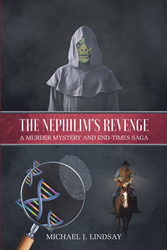 Lindsay writes, “Michael Lindsay wrote this murder mystery coming directly from his forty-plus years of forensic experience as a police officer, crime scene specialist, investigator, and academy crime scene instructor. More than being just a technically correct police story, this saga intertwines Mike’s passions for the Wild West and the cowboy life; his awe of the few remaining wilderness areas; his interest in the many legends of the Superstition Mountains of Arizona; and his extensive studies of end-time Bible prophecy, occult manifestations, and UFOs. One would think that these diverse subjects will not be part of a real-world story, but many surprising revelations are exposed in this implication but accurate account. In fact, this deep whodunit mystery is actually solved by looking closely at the epic conflict of good versus evil through uncovering several ancient end-time prophecies.

“Readers will be surprised to find that by the end of this deceit-filled tale of treachery, they will have a real hands-on understanding of the end-time prophecy that will enable them to read and comprehend many prophetic Bible passages that pastors today refuse to teach and that they, quite honestly, do not really understand.

“This mystery story, coupled with Mike’s first book on prophecy, ‘The Town Crier: Two Months to Prophetic Literacy (A Guide to Saving America—One Prophecy at A Time),’ will bring readers to a level of prophetic understanding far beyond what most priests and pastors possess today.”

Published by Christian Faith Publishing, Michael J. Lindsay’s new book tells an eye-opening story to the readers as the author reveals both ancient and end-time prophecies that allow them to comprehend and understand many prophetic Bible passages.

View a synopsis of “The Nephilim’s Revenge: A Murder Mystery and End-Times Saga” on YouTube.

Consumers can purchase “The Nephilim’s Revenge: A Murder Mystery and End-Times Saga” at traditional brick & mortar bookstores, or online at Amazon.com, Apple iTunes store, or Barnes and Noble.

For additional information or inquiries about “The Nephilim’s Revenge: A Murder Mystery and End-Times Saga”, contact the Christian Faith Publishing media department at 866-554-0919.