Mitzi Hall’s Newly Released “Robert’s Story: His Long, Long Walk to Victory” Is an Inspiring Memoir of a Pastor Who was Given a New Life Far Beyond His Dreams

“Robert’s Story: His Long, Long Walk to Victory” from Christian Faith Publishing author Mitzi Hall is a compelling story of a man whose faith to God has never wavered despite living in poverty and caring for abandoned babies and small children left at his doorstep. 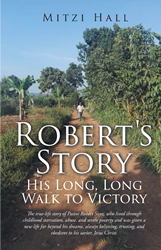 Hall writes, “He started life with an unwed mother who could not provide his needs. At the age of two, she took him to his father, where the abuse and starvation began. It was only by the grace of God, who had a divine plan for him, that he survived. He was dismissed from his father’s house at the age of sixteen and lived on the streets of Kampala, Uganda, East Africa, and ate from trash cans. His faith in his savior, Jesus Christ, never wavered through the thirty-one years he lived in poverty and caring for abandoned babies and small children left at his church doorstep. This is the true-life story of Pastor Robert Sisye who was given a new life far beyond his dreams. He believed, trusted, and remained obedient to his lord and savior, Jesus Christ.”

Published by Christian Faith Publishing, Mitzi Hall’s new book is an amazing journey of a pastor who started life with both parents who could not provide his daily needs, but because of his strong faith in God, he was given a second chance, beyond his expectations.

With this purpose, Hall inspires the readers to live like the pastor, that despite having no possessions in life, his love, faith, and trust to God still exists.

View a synopsis of “Robert’s Story: His Long, Long Walk to Victory” on YouTube.

For additional information or inquiries about “Robert’s Story: His Long, Long Walk to Victory,” contact the Christian Faith Publishing media department at 866-554-0919.