Step back in time with a riveting new book about Vietnam, seen through the lens of an anesthesiologist who saved countless lives during 1969, the year he served in Vietnam. 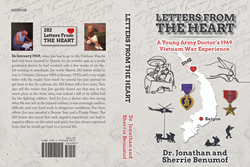 Step back in time with a riveting new book about Vietnam, seen through the lens of an anesthesiologist who saved countless lives during 1969, the year he served in Vietnam.

"Letters from THE HEART: A Young Army Doctor’s 1969 Vietnam War Experience" takes a fascinating look back at the grounding in medicine that Dr. Jonathan L. Benumof received during the Vietnam War. He endured and persevered through the trauma and drama with the love and correspondence with wife Sherrie, often accompanied by her banana oatmeal chocolate chip cookies, and preserved in these 282 Letters from The Heart. Dr. Benumof went on to become one of the top Anesthesiologists in the world, publishing numerous definitive books in his field: critical resources that other physicians continue to rely upon. Recently retired in 2019, Dr. Benumof was Professor of Anesthesiology at the University of California School of Medicine, San Diego for over 40 years.

The book includes an introductory commentary currently written by the authors regarding important issues, events, thoughts and feelings that provides a very helpful context to the rest of the book, as well as a brief look at their lives after 1969 as well as numerous photos. This intimate memoir speaks well to Dr. Benumof's character and his dedication to family and humankind.

"Letters from THE HEART" provides a fascinating look at history through the daily lens of an intelligent and articulate physician who was drafted to serve in Vietnam for a year. Married to his wife for just 6 months, they agreed to write daily letters to each other, which ultimately became the mental lifeline of hope that sustained Dr. Benumof through a year of disheartening conflict that often seemed to stretch on forever.

Following a mere three months of on-the-job anesthesia training (at his first Army assignment at Fort Knox, Kentucky), the author was sent to serve as an anesthesiologist in his MASH Unit, the 18th Surgical Hospital in the Fire Base "Camp Evans." Located just south of the DMZ (Demilitarized Zone) in Vietnam, it was considered one of the most dangerous places during the TET offensive, and MD anesthesia providers were badly needed. The author dedicated himself to saving the lives of wounded soldiers to the best of his growing abilities in operating conditions where the heat could exceed 120 degrees and often during constant bombardment by the North Vietnamese Army.

The book is inspiring for all readers as the author depicts his struggles through depression and the monotony of day to day living outside the operating room. His love for his wife and her love for him are a constant within each letter. If he had not received his wife's nearly daily letters, audiotapes, photos and care packages, he probably would not have survived to conquer his anxiety and depression brought on by the horrors of the war. Every day he focused on his hope of returning to start a happy, loving family life with her.

After a year of brutal service in Vietnam, Dr. Benumof returned to the United States and through hard work and dedication became world-renowned as a top Anesthesiologist. His accomplishments revealed the importance of keeping hope in our lives. His year in Vietnam left some lasting scars as he continued to suffer from PTSD and alcoholism for decades after he returned to the United States. With the support of family and others, he eventually sought treatment and has lived a life of sobriety since November 2008.

For his work in Vietnam, he was awarded a prestigious Bronze Star as appreciation for his service. Dr. Benumof shares the impact of the lack of welcome home or gratitude by Americans for those in the military who returned home after their difficult missions. It was not until 2012 that President Barack Obama established the Vietnam War Veterans Day, long overdue.

Dr. Jonathan Benumof studying from a medical book at his desk in Vietnam

Dr. Jonathan Benumof performs laryyngoscopy and tracheal intubation to get a patient ready for surgery.