Patrick Elmore’s newly released “Chicken Ain’t Got a Chance!” is an enthralling tale of a chicken’s great escape from a chef who plans to cook her

“Chicken Ain’t Got a Chance!” from Christian Faith Publishing author Patrick Elmore is an entertaining story about a chicken who is helped in concocting a plan to evade a chef who wants to cook her. 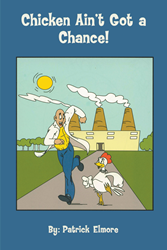 Elmore shares, “Being raised on the Cookachick Chicken Farm was an honor. It was deemed through its numerous chicken contest winnings. Chef Cookachick was envied and feared both within and beyond the cooking community. Yet each year, he craved a more self-pronouncing number-one chef’s award—one that outdid the previous years’ award. Excitement was in the air. His most prized possession, Chickia, was being pampered and prepared for the big evening. Although she had no idea, she knew that what she had been told was not the truth. She had no idea that today was the day that she would become a chicken dinner. Fortunately for her, Inspector Little was not going to let that happen. According to Little, you can’t cook what you can’t catch. He would have to help her escape without it looking like he helped her.

“The Cookachick Factory was a very dangerous place, especially for a helpless little chicken. But if he could get her quickly and safely off the property, she’d stand a better chance of making it somewhat by herself. For now, the challenge was gonna be convincing her that there was even a need to escape. Chickia believed everything Cookachick told her, and his stories were always the truth, or so he said…”

Published by Christian Faith Publishing, Patrick Elmore’s new book shows how trust can be broken and that goodness can be found in unexpected places from unexpected people, and that one has to have faith.

Follow the thrilling journey of a chicken as she gets the help that she needs to escape a cook who can end her hopes and dreams in life.

View the synopsis of “Chicken Ain’t Got a Chance!” on YouTube.

Consumers can purchase “Chicken Ain’t Got a Chance!” at traditional brick-and-mortar bookstores or online at Amazon.com, Apple iTunes store, or Barnes and Noble.

For additional information or inquiries about “Chicken Ain’t Got a Chance!,” contact the Christian Faith Publishing media department at 866-554-0919.