“Serenity’s Promise” from Christian Faith Publishing author Peter Speciale is an engaging fiction that brings the stories of three seemingly unconnected individuals and the surprising lessons of faith that would result. 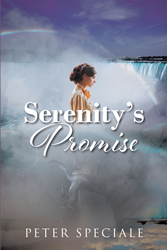 “Serenity’s Promise”: a charming young adult fiction with a surprising twist. “Serenity’s Promise” is the creation of published author Peter Speciale, a dedicated husband and father who served with the United States Marine Corps. He received a bachelor’s degree after his honorable discharge from military duty. Speciale served during Operation Desert Storm.

Speciale shares, “Death we must endure, but what happens afterward? Mary O’Neil says she knows what transpires afterlife…and can prove it.

“Serenity’s senior year had gone from collections of memories to recollections of regret. The end could not come fast enough for her.

“Trevor felt life had given him a raw deal. He intended on cramming as many years’ worth of life as he could in the very possible short time he had left.

“In 1968, Serenity Marolis, a young woman just out of high school, struggled to survive after plunging into the ferocious waters of Niagara Falls. While she was fighting for her life, she found herself in the realm between life and death and was sent on a journey through history by an angelic being. As Serenity made her way toward her eternal destination, she hoped to find her friend waiting on the other side.

“Sixteen-year-old Trevor Wyatt did not believe in eternity or that if there was a God, He would allow a person to suffer with the heart condition Trevor had had to live with. In 2018, Trevor met Mary O’Neil, who told of Serenity’s plight. He considered the story a fictional tale designed to convert him to Christ and was not persuaded. The stories were suddenly entwined, but would it change his mind?”

Published by Christian Faith Publishing, Peter Speciale’s new book will have readers racing to see what awaits a young man during a chance meeting with a woman known as Mary O’Neil.

Speciale weaves a compelling tale within the pages of this captivating work that will shock readers as a surprising secret comes to light.

For additional information or inquiries about “Serenity’s Promise,” contact the Christian Faith Publishing media department at 866-554-0919.