Pianist-Composer George Colligan's "King's Dream," His 36th Album as a Leader and 5th as a Solo Pianist, Due November 11 on PJCE Records

Best known as an acclaimed pianist and composer who's played on more than 150 albums with an array of jazz legends and mid-career masters, George Colligan is also a trumpeter, educator, bandleader, and drummer. His multifarious creative activities add up to a dauntingly complex portrait, but his new album "King's Dream"—a solo piano session conceived and recorded in the midst of the pandemic—distills his expressive power with elegant and instantly approachable concision. 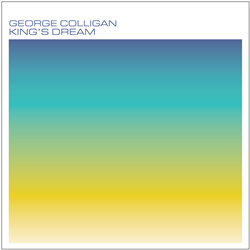 In this challenging era and complex world in which we live, we have to believe that good will and enlightenment will prevail over ignorance and hatred.

George Colligan expresses the complexities and conflicting emotions of our confusing, sometimes chaotic times with the November 11 release of "King’s Dream" (PJCE). Though not quite a sequel, the album builds on many of the themes presented on his previous solo album, 2018’s Nation Divided.

The 11 original compositions on "King’s Dream" (Colligan’s 36th album as a leader) are not all new: Some of them go as far back as 2008. But like all the best improvised jazz, the tunes become about the moment in which they’re being played—in this case a very fraught moment. “It was and still is such an unusual time,” Colligan says. “Who knows what tomorrow brings? The music is a representation of that uncertainty.”

The variety of moods on the album help underscore that uncertainty. It moves from the wistful, bittersweet “Clearing the Mind” to the glorious funk of “Change”; from the hard-bitten “Blues for Dwayne Burno” to the lyrical balance of hope and trouble in “King’s Dream”; from the plaintive “Wishing for Things to Happen” to the sanguine “Finally a Rainbow.”

The title track of "King’s Dream" is also its centerpiece. Invoking the famous ideals of Dr. Martin Luther King Jr., the piece both echoes and questions that optimism, making for a statement both timely and timeless about American life while also serving as a microcosm for the album’s precarious position between glass-half-full and half-empty—with glass-half-full perhaps taking the edge.

“In this challenging era and complex world in which we live, we have to believe that good will and enlightenment will prevail over ignorance and hatred,” Colligan writes in the album’s liner notes. “I don’t know whether music can make a difference, but I dedicate my album to those who believe in, as drummer Al Foster would say, ‘Peace, Love, and Jazz.’”

George Colligan was born December 29. 1969 in Summit, New Jersey, but considers his hometown to be Columbia, Maryland, where he grew up since about the age of 3. In the fourth grade he took up trumpet in the elementary school band, then got serious about the instrument in middle school—around the time he discovered jazz from a neighbor who gave him a stack of Clifford Brown, Dizzy Gillespie, and Miles Davis records.

Colligan went to Baltimore’s Peabody Institute, earning his degree in classical trumpet. While in Baltimore, though, he started teaching himself to play jazz licks on piano, soon getting gigs on the local scene, and suddenly found himself selling all his trumpets and becoming a professional pianist.

He shuttled back and forth between Baltimore and Washington, DC, mentoring with such musicians as Paul Carr, Gary Thomas, and Reuben Brown for several years before he made the leap to New York City in 1995. These associations meant that he already had some cachet on the New York scene when he arrived, and he was soon working with legendary figures like Eddie Henderson, Gary Bartz, and Lee Konitz, as well as recruiting the revered bassist Dwayne Burno and drummer Ralph Peterson for his own 1996 debut Activism.

His career continued to grow, collaborating fruitfully with other greats of his generation including Ingrid Jensen, Mark Turner, Nicholas Payton, and Kurt Rosenwinkel; working under Jack DeJohnette, Buster Williams, Billy Hart, and Al Foster; and recording dozens of albums under his own name. In 2005, he married fellow pianist Kerry Politzer, and a few years later they moved to Winnipeg, Manitoba, where he began a career as a jazz educator.

That career continued on to a job at Oregon’s Portland State University, where Colligan moved in 2011 and remains today. In addition to his academic work, he has become a mainstay of the Portland jazz scene—as a drummer as well as a pianist. (He’s the drummer on Kerry Politzer’s latest CD, "In a Heartbeat," also on PJCE Records.) Indeed, although "King’s Dream" is a solo album, it is also a collaboration with a longtime Portland colleague, pianist Randy Porter, who recorded, mixed, and mastered the album at his Heavywood Studio.