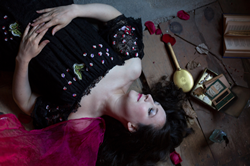 "mesmerizing...thoughtful, pensive and flush with an emotional flourish, all carefully and adeptly executed...simply superb" – Goldmine

MPress Records has just released "Sleep When I'm Tired" on the heels of prior single "Unconditional", the new track from Poetica, a spoken-word concept album conceived, produced and engineered by 6-time Independent Music Award winner Rachael Sage. The track premiered in Americana Highways. With its roots planted firmly in experimental and boundary-pushing genres, Poetica is a cinematic, stylistically expansive odyssey. Its fusion of poetry with jazz, classical and Americana musical elements calls to mind such poets/musicians as Leonard Cohen, Laurie Anderson, and Patti Smith. Poetica’s self-titled album releases on October 22nd.

Listen to "Sleep When I'm Tired"

Sage explains, '“Sleep When I’m Tired”' is the only sung piece on Poetica – versus the rest of the album being spoken-word focused material. The reason I included it was because it was composed in real time off the top of my head, as I sang the lyrics over a guitar loop without editing a line or redoing the lead vocal…it was one take, and a rather imperfect, gritty performance but I felt it captured a feeling, in the spirit of the album as a whole. I had been listening to Nick Cave’s ‘The Weeping Song’ earlier in the evening, fell asleep, and then decided to build a piece around clapping, which you can hear in the choruses. From there, I added beatboxing and percussion and just tried to capture the essence of profound exhaustion, and the process one goes through trying to emerge from darkness into light."