R C Hetrick’s newly released “Twelve Ordinary Men: A Believer’s Guide To Sharing Your Faith” is an engaging exploration of the lives of the disciples

“Twelve Ordinary Men: A Believer’s Guide To Sharing Your Faith” from Christian Faith Publishing author R C Hetrick is an enjoyable discussion that encourages readers to see the disciples as average men faced with a miraculous duty. 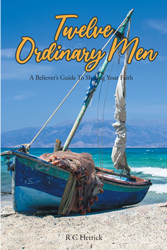 Hetrick shares, “I tried to communicate the human side of some of Christ’s disciples. Too many of us think of these guys as saints. Although they did amazing and miraculous things for the kingdom of God, they were as ordinary as you and me until their encounter with Jesus Christ. Then and only then were they able to accomplish what they did for the Lord. My prayer is that when you read this book, you might realize that you, too, can have the same power the disciples had to reach people in your sphere of influence. After all, we have the same spirit and serve the same God—the God of Abraham, Isaac, and Jacob, the God of the Bible.

“Please feel free to reach out to the author directly by emailing twelveordinarymen@gmail.com.”

Published by Christian Faith Publishing, R C Hetrick’s new book is an intriguing read that encourages readers in their own faith journeys.

Hetrick provides an uplifting and inspiring discussion within the pages of his thoughtful study of the disciples.

Consumers can purchase “Twelve Ordinary Men: A Believer’s Guide To Sharing Your Faith” at traditional brick & mortar bookstores, or online at Amazon.com, Apple iTunes store, or Barnes and Noble.

For additional information or inquiries about “Twelve Ordinary Men: A Believer’s Guide To Sharing Your Faith,” contact the Christian Faith Publishing media department at 866-554-0919.