R.E. Carson’s newly released “They Say It’s Impossible” is a stirring novel of three friends and their purpose-driven journey across the lands of America

“They Say It’s Impossible” from Christian Faith Publishing author R.E. Carson is a heartwarming tale of three men who traverse the terrains of America and meet awe-inspiring circumstances. 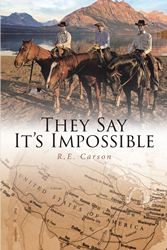 Carson shares, “Clint finds himself interacting with an angel of God as he journeys from British Virginia to California in 1860. During his trek, he meets Big Joe, a runaway slave; and Wong, a Chinese youth, who become Clint’s traveling companions. They are protected by an angel of God and shown the future of America.

“Along the way, Clint lives with the Shawnee Indians, who teach him various skills, and an alligator hunter who shows him how to hunt and sell gator meat, work in a livery stable, and ride trail on a cattle drive. All three meet a mountain man who steals, and they seek revenge.

“Clint gets into a gunfight in Dodge City, Kansas, becoming a fugitive and lives with Apache Indians all while the three are eluding slave hunters and civil war military units. The angel takes all three into outer space where they see the future of space flight and the invention of automobiles and various manufacturing companies. Wong is shown where he will be in his future, and Big Joe is taken into the future to his home in Jamaica where he sees the plight of his parents.

“Picture yourself traveling with Clint, Big Joe, and Wong as they encounter never-before-seen or experienced events. What would you do? How would you react?”

Published by Christian Faith Publishing, R.E. Carson’s new book is filled with melodramatic scenes that enrapture the hearts and minds of readers as they witness the resilience, resolve, and steadfast belief of three men who receive divine messages in their path across America.

This book is an impassioned masterpiece that shows the ineffable design of God that graces life with profound knowledge and wisdom.

View the synopsis of “They Say It’s Impossible” on YouTube.

Consumers can purchase “They Say It’s Impossible” at traditional brick-and-mortar bookstores or online at Amazon.com, Apple iTunes store, or Barnes and Noble.

For additional information or inquiries about “They Say It’s Impossible,” contact the Christian Faith Publishing media department at 866-554-0919.