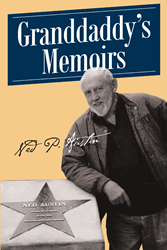 Ned P. Austin, a World War II veteran, an actor, and a loving father and grandfather, spent the latter portion of his life collaborating with his wife, Roberta Austin, to complete the recording of his life’s major events, “Granddaddy’s Memoirs”: a portrayal of the grit required of one man to surmount not only hardships, but also life threatening events.

“At the urging of friends and family, Ned began writing this book which I typed as he dictated to me,” Roberta Austin said of this work. “Ned loved to entertain people with stories and comedy. That was his legacy. Our family wishes he had had time to write more.”

Published by New York City-based Page Publishing, this memoir brings readers into those who became known as the Greatest Generation, the individuals who faced international economic uncertainty, global unrest, the rise and fall of fascism, and the explosion of American society through art, music, and culture.

“Ned tells us about growing up in a religious farming community during the Great Depression and coming of age to serve as a foot soldier in World War II,” Roberta Austin continued. “This recounts some of his experiences when he became a prisoner of war of the Germans until the war ended. But it also speaks about Ned Austin, the actor who played the role of Daniel Boone in the drama, ‘Horn in the West’, of the old Dixie Barber Shop (now gone), where Ned spent many years as a barber.”

Readers who wish to experience this profile of rural American life, bravery in the face of war, and trying to make the best out of any situation can purchase“Granddaddy’s Memoirs” at bookstores everywhere, or online at the Apple iTunes store, Amazon, Google Play or Barnes and Noble.