Rollin Lowell Erickson and Hazel Rosalie Garcia-Erickson’s newly released “When I’m Lost, He Comes to Find Me: Inspirational Poems and Prose” is an inspiring collection

“When I’m Lost, He Comes to Find Me: Inspirational Poems and Prose” from Christian Faith Publishing authors Rollin Lowell Erickson and Hazel Rosalie Garcia-Erickson is a stirring selection of poems inspired by God’s word and the authors’ spiritual experiences. 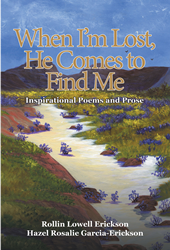 Erickson and Garcia-Erickson share, “Rollin was the sixth child born to missionary parents in Lima, Peru. The family returned to USA when he was two years of age. Growing up in central California, he spent summers as a migrant farm worker. In 1947, at nine years of age, he attended a Billy Graham crusade where he responded to the invitation by Mr. Graham to come forward as a public expression of faith. He graduated high school in the top 3 percent of his class, having attended eleven different schools. While serving in the US Navy, he met and married Patricia Fink. They parented two sons, Phillip and Timothy. They were proprietors of a printing business for seventeen years. Patricia went to her eternal reward in 1992.

“One of Rollin’s last contracts as proprietor was to print publicity and educational materials for the 1995 Billy Graham crusade. After selling the business, he earned a degree in cultural studies and relocated to New Mexico, where he met Hazel Rosalie Garcia at a senior center. They were married a year later.

“Hazel Rosalie Garcia was born in northern New Mexico to families that migrated from Spain about the sixteenth or seventeenth century. Her father, Ulysses, enlisted in the Army Air Corps during WWII. After the war, Hazel moved with her parents to Albuquerque, where she and her four siblings attended public schools. Hazel graduated from HS, earned a Bachelor of Arts degree from BIOLA college in Los Angeles, retired from working for the US government after twenty-five years, then earned her second Bachelor of Arts degree from Colorado Christian University.

“Together, Rollin and Hazel have coauthored writing and teaching projects, including When I’m Lost, He Comes to Find Me. They are both grateful to God for His generous expressions of steadfast love.”

Readers will discover a selection of spiritually charged poems within the pages of this captivating anthology.

Consumers can purchase “When I’m Lost, He Comes to Find Me: Inspirational Poems and Prose” at traditional brick & mortar bookstores, or online at Amazon.com, Apple iTunes store, or Barnes and Noble.

For additional information or inquiries about “When I’m Lost, He Comes to Find Me: Inspirational Poems and Prose,” contact the Christian Faith Publishing media department at 866-554-0919.