S. Diane Williams Sprecher’s newly released “Bullied? You Are Not the Only One After All, So Was God’s Only Son” is a creative narrative that explores bullying and faith

“Bullied? You Are Not the Only One After All, So Was God’s Only Son” from Christian Faith Publishing author S. Diane Williams Sprecher is an enjoyable and lyrical work that presents readers with a spiritually-based response to coping with bullies. 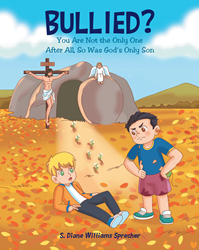 Sprecher shares, “Have you ever been bullied? Well, it is not a pleasant experience. You could be bullied by someone you know or by a stranger. And this bully may hurt you by saying mean words or by hurting you physically when this bully hits you or pushes you down.

“Today, our story begins with a boy who is in kindergarten, and he is playing outside during recess. His name is Zane. And Zane is usually a happy five-year-old boy. But today, another boy has taken Zane’s toy and has pushed him down hard on the ground. Zane can’t believe what has just happened to him. A stranger has just hurt him. He doesn’t know what to do. But then it is the end of recess (playtime outside), and Zane returns to his kindergarten classroom.

“Next, he rides his bus to the aftercare childcare where he decides to tell his teacher what happened on recess today. His teacher, Ms. Diane, reminds Zane of his faith and belief in Jesus. She tells him that he had been bullied today. She also tells him how someone was also bullied over two thousand years ago.

“Jesus was hurt much worse because a group of mean people didn’t believe Jesus was telling the truth when he announced that he was God’s Son. They thought he was lying to them.

“Ms. Diane reminds Zane of the importance of prayer. They pray together for safety and protection for Zane, and they also pray for this unknown bully. The name of this boy doesn’t matter because our Heavenly Father knows him. This bully may live in an unsafe home where he has learned or seen someone mistreated. So they also pray for this bully.

“After praying, Zane begins to giggle. Ms. Diane asks Zane what has made him laugh.

“Read along to the end to find out why Zane is giggling and no longer sad. Remember, if you have been bullied, it is important to tell an adult, an older person who will listen, because maybe that bully needs help too.”

Published by Christian Faith Publishing, S. Diane Williams Sprecher’s new book will offer an encouraging opening for children to bring up struggles they may face resulting from bullying.

Sprecher shares in hopes of empowering upcoming generations with a helpful narrative that provides social and spiritual lessons.

Consumers can purchase “Bullied? You Are Not the Only One After All, So Was God’s Only Son” at traditional brick & mortar bookstores, or online at Amazon.com, Apple iTunes store, or Barnes and Noble.

For additional information or inquiries about “Bullied? You Are Not the Only One After All, So Was God’s Only Son,” contact the Christian Faith Publishing media department at 866-554-0919.