S. Kuhl’s Newly Released “Why Evil: The Rationality of Belief in God's Existence” is a Profound Account that Tackles the Concept of Evil and Its Impact on Spirituality

“Why Evil: The Rationality of Belief in God's Existence” from Christian Faith Publishing author S. Kuhl is a riveting opus that delves into the question of evil’s prevalence on the world and how this the world’s perception of God. 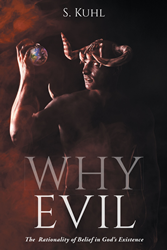 Kuhl shares, “The atheists ask, if God is all powerful and all good, why then is their evil in the world. At first, this sounds like a reasonable question and in times past, the challenge was made against the existence of evil. However, in our modern world, the challengers have upped the ante and use the question to challenge the existence of God. New Christians may be chilled by the question, as the author was, upon first hearing the question, and elders may also be looking to broaden their knowledge of this question. This question is not limited to Christianity or modernity; it has existed since ancient times, and it attacks any monotheistic religion, where God is said to be good and all powerful. So modern prideful individuals, thinking they are smart, by asking the question are not as smart as they suppose; they are only echoing a very old question. The most frequent time honored response has been free will, however, Why Evil shows a variety of Bible-based reasons that leave God sovereign and in control. Why Evil exposes some of the historical answers and introduces some of the responses given by the ancient Israelites. In fact, ‘The rationality of God’s existence is established through the existence of evil. Evolutionists tell us we are all just a bunch of chemicals, and we originated as single-cell organisms which evolved into man (most are creatures having enough intelligence to rationalize that something far greater must exist). By evolution, there would be no good and no evil, only existence and instinct (like some wild animal), no absolutes, no knowledge, no morals, no education, no civilization, no freewill, no smartphones, and the bigger fish would devour the little fish. Shall we continue? Viva la creation!”

Published by Christian Faith Publishing, S. Kuhl’s new book enlightens readers with the revelation of evil that lurks within the world and its parallelism with godhood and faith.

This book draws in an accepting heart and mind in analyzing the wisdom behind metaphysical concepts that govern and shape reality.

View a synopsis of “Why Evil: The Rationality of Belief in God's Existence” on YouTube.

Consumers can purchase “Why Evil: The Rationality of Belief in God's Existence” at traditional brick & mortar bookstores, or online at Amazon.com, Apple iTunes store, or Barnes and Noble.

For additional information or inquiries about “Why Evil: The Rationality of Belief in God's Existence”, contact the Christian Faith Publishing media department at 866-554-0919.