“I Will Finish and I Won’t Be Last” from Christian Faith Publishing author Sally Ann Whitney is a stirring book that gives hope to the readers, enabling them to be strong in whatever situation they might encounter as they journey their lives. 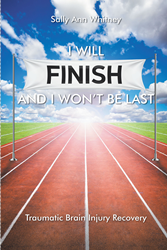 “At an Arizona ranch, Sally Whitney was suddenly thrown headfirst from a runaway horse. Landing on her head, she suffered a traumatic brain injury resulting in partial paralysis on the left side of her body and a three-week coma. She struggled, unsuccessfully, to reenter the social life of a ten-year-old.

“Still in social isolation many years down the road, she rehabilitated the best she could on her own. One of her efforts to continue her lifelong road of rehab, and due to the fitness craze in 1982, she found herself in the presence of a nearby gym. As Sally limped into the gym, the manager offered her entry blank for the Phoenix 10K Race being held the very next day.

“Sally took the entry blank as a courtesy. The pamphlet’s heading caught her attention, thus presenting her with another challenge. It read, ‘Run, Jog, Walk, or Crawl: The Phoenix 10K.” She thought, What the heck, I can crawl.

“Doors she opened before this conquest—getting a job, for instance—and other triumphs taken for granted by many became huge barriers for the brain-injured. Sally, though, couldn’t or wouldn’t back down from life’s challenges.

“Besides being a thriving member of her Senior Citizen Independent Living Apartment Complex, she continues after thirty-six years to actively participate in 5K walks to the cheers of many in the Phoenix area. In 2013, she was admitted to the Arizona Runners Hall of Fame.”

Published by Christian Faith Publishing, Sally Ann Whitney’s new book shares a wonderful reading experience with the readers as the author shares her horrific yet inspiring story on how she thrives and triumphantly survives the unyielded trials she has in her life.

With this purpose, Whitney explains how she used her courage to enter adulthood as her desire to give a glimmer of hope to those who need to hear that, when the going gets tough, the tough get tougher and take life one small stride at a time.

View a synopsis of “I Will Finish and I Won’t Be Last” on YouTube.

Consumers can purchase “I Will Finish and I Won’t Be Last” at traditional brick & mortar bookstores, or online at Amazon.com, Apple iTunes store, or Barnes and Noble.

For additional information or inquiries about “I Will Finish and I Won’t Be Last,” contact the Christian Faith Publishing media department at 866-554-0919.