“Qur’an, the Universal Message Guides Mankind to Ways of Peace and Safety” from Christian Faith Publishing author Syed Z. Ahmad is a thought-provoking examination of modern religious, cultural, and political practices that are leading to unforeseen circumstances. 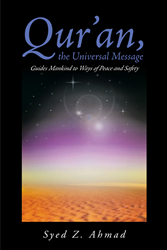 Ahmad shares, “The Mujahidin (al-Qaeda and Taliban), yesteryear’s darlings who, by dismembering the Soviet Union, conferred a momentous favor on the United States and the West, are today’s terrorists (which now includes ISIS fighters). Is this volte-face a baptism of the remaking of the world order in the image of the West? Is the West provoking a clash of civilizations between the Christian and Islamic civilizations with the Christian churches in tandem, a crusade launched by President Bush, a born-again Christian sent by God on a special mission? In this ambiance of conflict, does the Biblical quote “Whoever is not with us is against us” gain currency as a battle cry? On the Muslim front and in response, Wahabism, a fundamentalist creed that has strayed from the straight path of Islam, is rapidly gaining strength and is operating under different names. Wahabism provides the ideological support to them. They are the ones who are gearing themselves up to take on the world. We are aware of their capability. Their activities also portend disaster for mankind.

“In the process, the author explodes the myths wound by today’s Muslim mullahs (priests) about the status of women in Islam, Quranic philosophy of reward and punishment, Isra, the Night Journey of the Prophet of Islam, Gabriel, heaven and hell, the day of judgment, man’s final destiny, etc. The post-9/11 period saw a flooding of books with anti-Islamic contents. This book also attempts to project the real Islam, the universal and majestic message, which guides mankind to ways of peace and safety.

“To understand an important facet of today’s geopolitical reality and Islam’s guidance to mankind in these turbulent times, read this enlightening book.”

Published by Christian Faith Publishing, Syed Z. Ahmad’s new book is a compelling exploration of modern sociocultural issues and how they may lead to disaster.

Ahmad writes in hopes of spreading awareness of the significant societal issues threatening the cultural and spiritual wellbeing of many.

View a synopsis of “Qur’an, the Universal Message Guides Mankind to Ways of Peace and Safety” on YouTube.

Consumers can purchase “Qur’an, the Universal Message Guides Mankind to Ways of Peace and Safety” at traditional brick & mortar bookstores, or online at Amazon.com, Apple iTunes store, or Barnes and Noble.

For additional information or inquiries about “Qur’an, the Universal Message Guides Mankind to Ways of Peace and Safety,” contact the Christian Faith Publishing media department at 866-554-0919.