“A Father’s Quest” from Christian Faith Publishing author Wayne McColley is an engaging story of one family’s fight for justice and the spiritual messages received along the way. 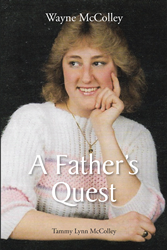 “A Father’s Quest”: a powerful story of paternal devotion. “A Father’s Quest” is the creation of published author Wayne McColley, a loving husband, father, and grandfather who served in the US Navy Reserve aboard the USS Enterprise, the largest warship in the world at that time, during the Vietnam War. McColley worked as a cabinet maker before engaging in a quest to become a successful farmer in 1974.

McColley shares, “The title of the book, A Father’s Quest, was decided on years before I started writing the book. I knew that I would be writing a book from what a medium had told me years before, but I never started it. Maybe I had to have a bad stroke to make it happen. I had prayed for years that my son would get married. Maybe I would have to have a stroke for this to happen too. God works in our lives in a strange way. For years I went to therapy, learning to walk and to work on moving my arm. I quit therapy in March 2018. I had nothing to do, and I became bored for the first time in my life. That was when I started writing. It would take me twenty-seven months to finish. Many of my friends told me to record the book and have someone type it for me, but I wanted to write the book completely by myself. I’m right-handed, and I can finally move my right hand but cannot really use it. I didn’t know how to type, but I typed it with one finger on my left hand on a computer.

“After our daughter Tammy died on January 5, 1997, it became impossible to sleep. During that time, I lived my whole life over again. I went on a six-year quest, trying to prove that Tammy was murdered and to get custody of my granddaughters, Tammy’s children. I would fail more than I would succeed. But I had become too stubborn to ever give up. After I had my stroke, many of my friends told me that this story was motivational to them. I hope you enjoy reading my book, A Father’s Quest.”

Published by Christian Faith Publishing, Wayne McColley’s new book is a thrilling retelling that will have readers engaged from the start.

McColley’s story is a heartfelt and heartbreaking reflection on a life lived in dedication to family.

View a synopsis of “A Father’s Quest” on YouTube.

Consumers can purchase “A Father’s Quest” at traditional brick & mortar bookstores, or online at Amazon.com, Apple iTunes store, or Barnes and Noble.

For additional information or inquiries about “A Father’s Quest,” contact the Christian Faith Publishing media department at 866-554-0919.