“Eve’s Apple: A Historical Novelette on How Eden Was Lost but Prophesied Regained” from Christian Faith Publishing author William Lindsey Thomas is an in-depth look into the first sin of Eve that brought death and discord to mankind in all forms. 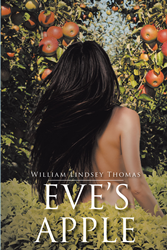 Thomas shares, “‘Eve’s Apple’ is the story of how one lady, Eve, contracted and spread the most fatal disease ever known to mankind as an act of her mind and will. The name of this disease is sin. This disease of sin is the root cause of all war, murder, stealing, lies, and every other known form of evil in the world. The result has been the death of every generation of mankind who has ever lived.

“‘But wait a minute,’ you say. ‘I believe death is caused by old age or cancer, a heart attack, or some other physical problem or disease and not by some religious belief called sin.’ This is partly true. But what is the root cause of all known diseases? And if all known diseases result in death, isn’t this just another way sin manifests itself?

“In addition to all these facts, I believe the story of Eve’s apple defines the history of the human race. Ralph Waldo Emerson once wrote, ‘There is no such thing as history, only biography.’ Well, if history is a collection of biographies, or stories, then this story of Eve’s apple ranks among the most important of all. The story of Eve’s apple began mankind’s conflict with a good and evil in our world. This struggle by you and me and the rest of the human race has affected our world and history more than any other challenge in life. How mankind has chosen to struggle with this conflict has shaped the history of our world.

“If the above reasons for Eve’s importance to history and your life are not enough, may I suggest one more: contained in this story of Eve is the prophecy of God’s answer to Eve’s sin, which contains faith, hope, and love.”

Published by Christian Faith Publishing, William Lindsey Thomas’s new book also reveals God’s plan of salvation for humanity that will redeem all creation to His glory and dispel the remnants of evil caused by Eve’s downfall.

View the synopsis of “Eve’s Apple” A Historical Novelette on How Eden Was Lost but Prophesied Regained” on YouTube.

Consumers can purchase “Eve’s Apple: A Historical Novelette on How Eden Was Lost but Prophesied Regained” at traditional brick-and-mortar bookstores or online at Amazon.com, Apple iTunes store, or Barnes and Noble.

For additional information or inquiries about “Eve’s Apple: A Historical Novelette on How Eden Was Lost but Prophesied Regained,” contact the Christian Faith Publishing media department at 866-554-0919.