The Spirit of John Lennon outlines a peaceful path to facilitating global change. 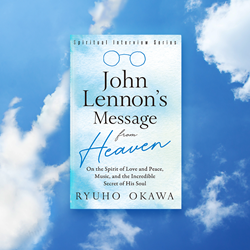 Music is a powerful tool for facilitating social change and the spirit of John Lennon continues to "rock" the establishment.

“John Lennon’s Message from Heaven,” is a new book written by World Teacher and Happy Science Founder Ryuho Okawa that presents several important messages to humanity in this time, particularly as concerns music, peace and freedom.

Within this work it is revealed that John Lennon was a part of the soul of Jesus Christ, and the similarities between them are notable; both rebelled against outdated forms of established norms in their respective time period, and both did so peacefully, albeit radically. The notion that 9th Dimensional souls, as are explored in depth in “The Nine Dimensions,” could essentially split themselves into many incarnated individuals is of significance and reveals an important spiritual dynamic. It is hinted in the work that many individuals who wield great influence in the world may be an element of a higher dimensional soul incarnate. Such elements of higher souls may be divided in accordance with specialty areas, so that in the case of John Lennon, he incarnated as an artistic aspect of Jesus Christ in order to spread the power of love through music.

Music is a powerful tool for facilitating social change, and the spirit of John Lennon explores this idea by explaining that Heavenly spirits may often approach musicians in order to mediate music through them which is of a higher dimensional spiritual signature. As is indicated, it is no easy task to mediate Heavenly music, in part because the vibration can feel very distant from this world. When such music is successfully mediated into this world, however, it can be with consequences that “rock” the establishment.

While John Lennon utilized music to protest the Vatican and the war machine, Heavenly music today may be particularly beneficial for helping to destabilize authoritarian regimes such as those in China and North Korea, where communism holds people at the mercy of the state. The spirit of John Lennon believes that were rock music to be spread into China, the general populace would undergo a drastic change, and may come to demand freedom and democracy from their government.

As is indicated, the book implies that there are instances where it is right and necessary to rebel. Rebellion is often thought of in the context of devils that rebel against Heaven, but such is not always the case. As the spirit of John Lennon indicates, rebellion is often an act of becoming and living as God intended humans to be, especially where natural tendencies have become suppressed.

Happy Science is an example of an organization that is working to “rock” the establishment of the contemporary times by transcending the limitations of traditional religions and establishing a reunion of politics with religion. Needless to say, this is no easy task, and it is implied in the book that Happy Science members will benefit from having greater courage and confidence in themselves, without being overconfident and assuming prematurely that they are Bodhisattvas. There is a balance to be struck here, and it is something that all humans can work toward. There are changes that must be made in the world if humanity is to work toward initiating a new Golden Age, and all people can all play a part in this.

This book will be of interest to anyone who is a fan of John Lennon and The Beatles, but it is also relevant to anyone who feels that there is something amiss in the world, and that they can be doing more to facilitate change than they are presently doing. The message that all humans can be doing more to change the world is not a demoralizing one, but meant to encourage and empower humanity toward a greater sense of pragmatism. People like Jesus Christ and John Lennon didn’t shake the foundation of the world by being timid, but did so through their boldness, and this is something all of humanity can work to develop further in order to bring about a more loving and happy world.

“John Lennon’s Message from Heaven” is available at all major bookstores nationwide, including Barnes & Noble and Amazon.