In Accused War Criminal, author Fiske Hanley II bravely recounts his experiences as a prisoner of war in Japan. 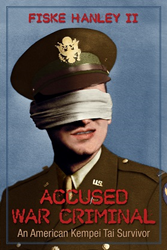 This intense hatred continued building up in me until sometimes I thought I would choke. - Fiske Hanley II

On the morning of May 31, 1943, less than twenty four hours after his graduation ceremony at Texas Technical College, Fiske Hanley boarded a train and changed his life forever. The train was to take him to Florida to begin his cadet training – he had been drafted by the US army to serve in the Second World War. Nine months later, he was assigned B-29 flight engineer and attached to the 504th Bombardment Group in the Pacific theater, but on his seventh mission, he and the ten other men of his crew were shot down over Japan. He arrived on Japanese soil via parachute and thus began his harrowing experience as a prisoner of war. Accused War Criminal: An American Kempei Tai Survivor (releasing today from Brown Books Publishing Group) is Hanley's powerful account of his harrowing experiences in World War II, from his training and commissioning, to his deployment and failed mission, to his imprisonment, all the way through his rescue and recovery.

During his imprisonment, Hanley suffered much at the hands of the Kempei Tai and was tortured, starved, and forced to endure extreme conditions in which his wounds were left untended. Though Fiske suffered greatly, he tried to overcome his hatred for his oppressors, even during his imprisonment.

"How many more notches could our hatred go? This intense hatred continued building up in me until sometimes I thought I would choke," Hanley writes. "All we could do was pray and hope that God heard us, even though I often worried that God would not hear me through such hate. So I tried to overcome it...”

With vibrancy and detailed honesty, this account amazes and humbles the reader as only stories of this level of heroism can. Hanley's remarkable tale, which began as a way for him to deal with the trauma of being held captive during the war, exemplifies the perseverance of the human spirit in the face of great adversity. Fiske recently celebrated his 100th birthday and is proud to share his story.

For more information about Fiske Hanley and his book, please visit http://www.brownbooks.com/h-l/.