Watch the Oscars of Dance streamed live for one night only, May 16, 6pm PT/9pm ET. Tickets available at worldchoreographyawards.veeps.com. 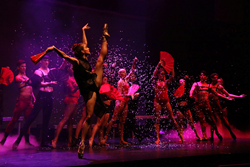 "This is a once in a lifetime opportunity to see the best dance content from around the world on one stage, streaming live for one night only,"says Choreo Awards founder, Allen Walls.

For the first time in the history of the World Choreography Awards (Choreo Awards), this year’s 2020 Choreo Awards will be streamed live from The Avalon Hollywood in Hollywood, CA on the ticketed live stream platform Veeps, May 16, 6pm PST/9pm EST.

This year’s first live streaming event is hosted by two-time Dancing with the Stars Champion and Emmy-nominated choreographer, Cheryl Burke.

The World Choreography Awards, known as the “Oscars of Dance”, celebrates the world’s best media choreographers in dance every year.

“We are very excited that the 2020 Choreo Awards will reach more audiences that love dance by streaming it on the Veeps platform," says founder and producer Allen Walls, “This is a once in a lifetime opportunity to see the best dance content from around the world on one stage streaming live for one night only.”

“Allen has created a wildly successful local event for the past nine years and it’s time to share this highly entertaining show with the masses,” says veteran television producer and Choreo Awards producer George Paige, “It is the natural progression to take this interim step for the brand as we establish it moving forward as a television franchise and stream the 10th anniversary show.”

For the full list of categories and nominees go to worldchoreographyawards.com

About the World Choreography Awards: The World Choreography Awards (Choreo Awards), also known as the “Oscars of Dance", is an annual live awards show that celebrates creativity and innovation by recognizing excellence in the art of dance choreography across media. Founded in 2011 by Allen Walls, the Choreo Awards takes place every year, in Los Angeles, to showcase the most innovative and original works by the world’s best choreographers featured in television, film, commercials, digital content, and music videos. The show is produced by its founder, Allen Walls and George Paige. Co-produced by Cheryl Baxter-Ratliff.

About Veeps: Veeps is a direct-to-fan experiential platform, custom-built for artists, by artists. Founded in 2017 by Benji and Joel Madden, it is the music industry's leading, premium live-streaming platform. In 2020 Veeps hosted hundreds of live-stream shows that helped artists make millions of dollars in revenue and today, in partnership with Live Nation, Veeps continues with a mission to power artists in the most critical early stages of their development, all the way through the biggest, most important moments of their careers.