From the 1st to the 9th of September, 12 prized lots of Ornellaia Vendemmia d’Artista 2017 “Solare” will be auctioned online in support of the Solomon R. Guggenheim Foundation’s access program “Mind’s Eye”. 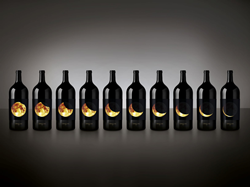 “Starting in 2019, we wished to make a contribution to the development of artistic perception by the blind and visually impaired, which is why we decided to support the Solomon R. Guggenheim Foundation’s ‘Mind’s Eye’ program.” - Giovanni Geddes da Filicaja, CEO of Ornellaia

Ornellaia, the iconic Italian wine estate, is pleased to announce that the Sotheby’s online auction will commence on the 1st of September, 2020 at 9am EDT for the prized bottles of Ornellaia Vendemmia d’Artista 2017 “Solare” (translated in English as “Radiant”) designed by the Argentinian artist Tomás Saraceno, renowned internationally for his interactive installations that allude to new sustainable ways of living on our planet in this age of ecological turmoil. Proceeds of the auction will go to support the Solomon R. Guggenheim Foundation’s innovative “Mind’s Eye” program. The auction will run through the 9th of September.

“We are delighted to collaborate on our tenth auction with Ornellaia’s exceptional Vendemmia d’Artista program, having enjoyed spectacular events over the past decade in New York, Hong Kong, London, Toronto, Basel, Los Angeles and Venice. For the second consecutive year, the special auction celebrating the 2017 “Solare” will be offered online. The sublime marriage of art and wine in these unique large format bottles is a winning combination that will prove enticing to collectors around the world,” comments Jamie Ritchie, Worldwide Head of Sotheby’s Wine.

“We are grateful to Ornellaia for their continued involvement in the visual arts and their support of the Mind’s Eye’s program offered both on-site and online,” Richard Armstrong, Director of the Solomon R. Guggenheim Museum and Foundation stated. “Thanks to the generosity of Ornellaia, we are able to expand the programs that allow us to promote the understanding and appreciation of modern and contemporary art to a wider public.”

The issue of environmental sustainability is particularly dear to Ornellaia, which has focused on self-sustaining ecosystems for some time now through precision agriculture. Due to this attention to the soil management, gentle handling of the grapes and a slightly earlier harvest, Ornellaia 2017 is a wine of surprising harmony. Axel Heinz, Director of the Bolgheri estate, explains, “In this year of extremes, in which frost, sun and drought all played a decisive role, we succeeded in bringing blackberry and licorice to the wine, alongside the velvety tannins typical of hot vintages; at the same time, superb envelopment and acidity instill Mediterranean sumptuousness in the wine.”

Simultaneously, in creating the artwork dedicated to the radiance of Ornellaia 2017, Saraceno sought inspiration in the alliance between the sun and populated systems of life. The site-specific work of art, which will be installed at the estate, will consist of glass spheres that, resembling clouds, form a magical floating city ideally powered by the heat of the sun. A take on this concept is the sculpture, titled “PNEUMA 4.21x105”, which tops the impressive 9-liter Salmanazar, the most prestigious lot at the auction. The artist has personalized in total 111 large-format bottles, depicting the various phases of a solar eclipse, in addition to crafting a special label, which will uniquely feature in every box containing six 750ml bottles of Ornellaia. All the labels are thermochromic and change color with the heat of one’s hand, inviting reflection about the impact of humanity on the planet.

These works of wine and art will be auctioned online on the Sotheby’s website from the 1st to the 9th of September. All those who register on http://www.sothebys.com/ornellaia will be able to view the lots, leave a bid and take part in the auction. Collectors from around the world can bid for a piece of this incredible collection, while also extending a gesture of generosity. Like last year, profits from the auction will go to the Solomon R. Guggenheim Foundation to support the “Mind’s Eye” program.

“In the last 11 years,” explains CEO of Ornellaia, Giovanni Geddes da Filicaja, “Ornellaia has donated over two million dollars to various institutions in the art world, from the Whitney Museum in New York to the Neue National Galerie in Berlin, the Fondation Beyeler near Basel, the Royal Opera House in London and the H2 Foundation in Hong Kong and Shanghai. Starting in 2019, we wished to make a contribution to the development of artistic perception by the blind and visually impaired, which is why we decided to support the Solomon R. Guggenheim Foundation’s ‘Mind’s Eye’ program.”

About Ornellaia - http://www.ornellaia.com
Ornellaia’s philosophy considers the birth of the wines to be the truest expression of their terroir. The grapes for Ornellaia are selected by hand, and picked in the estate's vineyards in Bolgheri, on the Tuscan coast. The varying natures of the estate's terroirs, marine, alluvial and volcanic, are ideal for the cultivation of Cabernet Sauvignon, Merlot, Cabernet Franc and Petit Verdot. The Estate extends over 115 hectares along the Tuscan coast, just a short distance from the medieval hamlet of Bolgheri and the famed cypress-lined avenue ‘Viale dei Cipressi’. The constant work of the Ornellaia team and the ideal microclimatic and geological characteristics have brought the wines great international success since the first vintage of Ornellaia in 1985. In 2001, the 1998 Ornellaia was declared Wine of the Year by the American journal Wine Spectator. In 2011 the German publication Der Feinschmecker awarded Ornellaia its most sought-after award, the ‘Weinlegende’. Ornellaia has received considerable recognition in the national and international press, and is consistently ranked among the top estates by Wine Advocate, Wine Spectator, James Suckling, Antonio Galloni, Bruce Sanderson and the Italian Wine Guides: Gambero Rosso, Espresso, and Veronelli

About Vendemmia d’Artista
The Ornellaia Vendemmia d’Artista project celebrates the exclusive character of every new vintage of Ornellaia. Every year, starting with the release of Ornellaia 2006 in May 2009, a contemporary artist crafts a site-specific artwork and a set of limited-edition labels, inspired by a word chosen by the Estate Director, Axel Heinz, to describe the personality of the new vintage.

A label styled by the artist features on one of the six 750ml bottles in every case of Ornellaia. As in previous years, the project includes a limited edition of 111 large-format bottles (100 Jeroboams - 3 liters, 10 Imperials - 6 liters and 1 Salmanazar - 9 liters) which are numbered and signed personally by the artist. Every year, a selection of these bottles is auctioned by Sotheby’s and the profits go to support the Mind’s Eye program at the Solomon R. Guggenheim Foundation.

About the “Mind’s Eye” program
The “Mind’s Eye” program, created by Guggenheim’s Education Department, assists visitors who are blind or have low vision in experiencing art by using all the senses. This approach promotes the development of creative impressions, emotional connections and memories, whose perception endures over time. As in art, the appreciation of fine wine requires the involvement of all the senses. It was this shared idea that resulted in Ornellaia lending its support to develop this particular program. Donations collected through Ornellaia Vendemmia d’Artista project enable the Solomon R. Guggenheim Foundation to further the activities of the “Mind’s Eye” program aimed at distributing the model in other art institutions, ensuring that its excellence continues to guide the museum programming for the benefit of the blind and persons with low vision all over the world.