17-year-old high-schooler, Riley Schmelzer, who performs under the name No Signal, is set to release his next concept EP "Shadow People" on April 16, 2020 via No Label Productions. Today, fans can pre-order the EP HERE. 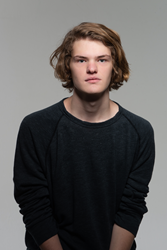 “It’s more than just the music. I want to create thought provoking music while submerging people in the entire aural experience and make them feel things they haven’t felt before.”

Eerie, shadowy, and cryptic, all of the songs on "Shadow People" were written, performed, and recorded entirely by high-school student Schmelzer in the basement of his home in Boulder, CO. A self-taught musician, Schmelzer plays lead and rhythm guitar, bass, drums, synthesizers, eBow, Theremin, and sings all of the vocals and backgrounds, as well as playing all other sounds heard on the EP. Touring members of the band include 19-year-old Nic Kubes (drums/percussion) and 21-year-old Tanner Shafer (bass/background vocals).

As you enter the world of No Signal, you are greeted with an immersive experience of sonic stories and overarching concepts to draw the listener in. Schmelzer says, “It’s more than just the music. I want to create thought provoking music while submerging people in the entire aural experience and make them feel things they haven’t felt before.” With "Shadow People" Schmelzer wrote the story before he wrote the music on the EP, “through the lens of a horror movie soundtrack composer.” Darker than anything he’s released before, "Shadow People" is the follow up to the EP, "Circle in the Sky" - listen HERE, written while Schmelzer was just 14 years old and full-length debut album, "Seat of Dreams" - listen HERE, released in 2019. All releases have been based off a story to create a visual for the listener while allowing them to decipher the meaning for themselves. “I don’t like giving the story away” says Schmelzer. “"Shadow People" follows one large story. Each track is like a chapter out of a book and if the listener pays close attention, they can get a detailed grasp of what this story is just by listening.”

The lead track “Grey Sun,” with its sparse lyric video - HERE, sets the stage for the poetic story of "Shadow People". The song is jarringly ethereal and features foreboding guitar parts, emotive vocals, and an imaginative arrangement that punctuates the ambience with heavy guitar riffs all providing the tone to for rest of the EP. “That first clash of the cymbals when the haunting guitar enters in the moment the story officially starts,” Schmelzer shares. Then comes “Idée Fixe” - listen HERE and the lushly layered “Vanished,” released today - listen HERE, is the first No Signal song to not have guitar. Instead, it features atmospheric textures and melodious vocals, and an impactful arrangement that is perfectly heightened by a drum-induced climax. The title track is dreamily ambient, layered with breathtaking harmony, and captures the frightening end of the thrilling storyline. “The reason I do this is to put words and music to emotions I’m feeling that I’ve never felt prior to discovering this music,” says Riley in closing. “I hope people feel transported by the theatrics and grandeur of what I’m presenting. I don’t know the meaning of it all—a lot of this is an anomaly to me—but I do know I want to move people the way I’ve been moved by this strange and grand sonic entity in the past.”

Schmelzer grew up in a musical household but never took music seriously until he was 14 when a flood devastated his family’s house, warping all the guitars his father owned. He and his father went through the lengthy process of restoring each guitar and on that last remaining instrument, Schmelzer began exploring music, and from there he began teaching himself to play every instrument he could get his hands on. Bands like Slipknot and Korn shifted his perspective but discovering Tool was epiphanic for Schmelzer. “It showed me music could be a fluid form of creativity and how the power of narratives and symbolism as part of a music package.” Soon after his Tool transformation, Schmelzer set out on a journey to establish his own world of creativity. He soon realized that communicating his vision to others was almost futile. So, he began a solitary artistic pursuit as No Signal and since then he’s quietly established himself as one of most exciting singer/songwriters in concept rock today thanks to his growing army of loyal fans and listeners.