18 Karat Reggae Gold 2020, the new album release from 18 Karat Reggae, aims to bring back the days when the most authentic Reggae Music was coming out of Jamaica, the birthplace of the genre. Recently Reggae Music has been dominated by mostly American Reggae bands and this phenomenon is visible both on the iTunes and Billboard Reggae Chart. 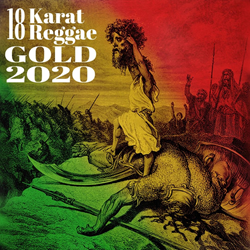 In Jamaica, dancehall has taken over Reggae and dancehall sounds more like hip than it does Reggae. Then you listen to the reggae bands from Cali, and these guys are playing real roots reggae, so of course their music will be embraced by real reggae fans

There has been a tremendous amount of bickering both overtly and covertly in the Reggae Music community about how much foreigners have taken the music away from Jamaicans. Currently the music is dominated by American bands, especially those out of California such as Slightly Stoopid, Rebelution, Groundation and Iration.

The truth is, foreigners did not take over Reggae Music. Most Jamaican artists and producers abandoned authentic Reggae music in order to indulge in the more financially lucrative Hip Hop. 18 Karat Reggae has stayed true to the musical roots and in their latest release has proven that real Reggae Music still comes out of Jamaica.

Cosmore Thompson, one of the producers on Reggae Gold 2020 said the reason foreign reggae bands are dominating the music is because they are the ones making real reggae music.

“In Jamaica, dancehall has taken over Reggae and dancehall sounds more like hip than it does Reggae. Then you listen to the reggae bands from Cali, and these guys are playing real roots reggae, so of course their music will be embraced by real reggae fans,” Thompson said on Irie FM.

He went on to say it was because of this why he took the extra effort to make sure that the compilation was authentic Reggae from start to finish. The album even pays tribute to reggae legend, Desmond Dekker, with Mr. Bertus remaking the hit Israelites but in a marijuana version. The song is called “Ganja for life” and is currently the number one Reggae song on Spotify.

The album also features Fitzroy Face whose voice is a staunch reminder of the late great Dennis Brown. His songs on the album are very infectious that will have many listeners putting him on repeat.

There is also Cane Juice who many reggae fans will remember from back in the 90s. The artist took a decade long hiatus but is back in fine form on this album with his songs “Jah is watching” and “Life ain’t easy.”

Thompson says it has been a long time since such an album of reggae excellence has left the shores of Jamaica.

18 Karat Reggae Gold 2020 was released on January 27 and is available for download on iTunes and call also be streamed on Spotify or Apple Music. For those who still listen to physical CDs, the album is also available on Amazon.

As a result of the musical shift in Jamaica, die hearted reggae fans were turning to reggae bands in the United States, especially California such as Slightly Stoopid, Rebelution, Groundation and Iration.