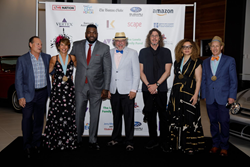 Boston Arts Academy Honors 2021 Honorees pose for photos during the live broadcast event and celebration on Saturday, May 1, 2021.

A star-studded night of music, dance, and performances by students, alumni, and Honorees at BAA Honors 2021 helped raise vital funds for Boston Arts Academy, the city’s only public high school for the visual and performing arts, during a live broadcast event Saturday night. The event helped Boston Arts Academy Foundation (BAA Foundation) raise nearly $1.7 million through BAA Honors during the past year.

More than 350 generous donors to BAA Honors 2020, which was postponed due to the COVID-19 pandemic, as well as BAA Honors 2021, secured nearly $1.7 million to support Boston Arts Academy’s students. All 2020 Honorees and sponsors actively participated in BAA Honors 2021.

BAA Honors celebrates BAA’s diverse, talented, and successful students. The night featured student and alumni performances and recognized prominent Honorees for their meaningful contributions to the community. A socially distanced event hosted by BAA Honors in Music recipient Ernie Boch Jr. was broadcast live on NECN and NBC10 Boston with NBC10 Boston co-hosts Latoyia Edwards and JC Monahan, and streamed live on the NECN and NBC10 Boston websites, making it accessible to supporters of the school across the world.

“BAA Honors is a celebration of the absolute best of what Boston Arts Academy has to offer,” said Boston Arts Academy Foundation President Denella Clark. “From our incredible students to our alumni who always give back to the next generation, to the Honorees who inspire our students to reach for greatness, it was an evening to recognize all of their accomplishments and to share in the passion that connects our remarkable community.”

“I’m very honored to receive this award,” said TV & Film Honoree David Ortiz Saturday night during the live broadcast. “I was born in the Dominican Republic, where music just runs through our blood and art is everywhere. When I think about music, I think about happiness. We’ve got to support [BAA] and we’ve got to help. We understand how massive this can be for the kids who come [to BAA] and learn and become independent because of it.”

About Boston Arts Academy Foundation
Founded in 1998 as the city’s only public high school for the visual and performing arts, Boston Arts Academy (BAA) has distinguished itself among urban public high schools as a leader in innovative and effective student-centered education. Consistently recognized locally and nationally for its achievements, BAA exemplifies the power of an arts-rich education and many BAA graduates have found success in college through the arts.

Through the six-year, comprehensive Building Our Future campaign, the BAA Foundation is raising $32 million to augment BAA’s school budget and ensure long-term sustainability. The campaign includes raising $10 million to bring the BAA Foundation endowment to $13.5 million and securing $15.5 million in operating reserves. The endowment and reserves support what makes BAA unique, including expanded programming, the Health and Wellness Program, STEAM, and funding for the arts. The endowment will support college scholarships for graduating seniors. The campaign supports BAA Foundation’s Annual Fund, which raises $5,000 per student each year. Building Our Future ensures that as BAA’s student body grows, students can become successful artists, scholars, and citizens.

About Boston Arts Academy
Founded in 1998 as the city’s only public high school for the visual and performing arts, Boston Arts Academy (BAA) has distinguished itself among urban public high schools as a leader in innovative and effective student-centered education. Consistently recognized locally and nationally for its achievements, BAA exemplifies the power of an arts-rich education and many BAA graduates have found success in college through the arts. In fact, for six straight years, 97% of BAA graduates have been accepted to college, with many becoming first-generation college graduates.

BAA’s dynamic program prepares graduates to be critical thinkers, effective communicators, collaborators, and creators. Students come from all 23 Boston neighborhoods to receive the formal arts training and academic instruction that will make them Boston’s next generation of artists and cultural leaders.

In fall 2022, Boston Arts Academy will welcome students to its first purpose-built, state-of-the-art school building directly across from Fenway Park. Among many highlights, the building will include new and much-needed enhanced theatres, career center, academic classrooms, dance studios, music practice rooms and fashion technology studios and workspace. When Boston Arts Academy opens its new school building, the number of students enrolled will increase to 500, and eventually grow over the years.