1 in 5 Fake Ecommerce Listings Come from 3% of Illicit Sellers Whose Removal Could Prevent $78B in Annual Losses for Brands and Public: Incopro Study 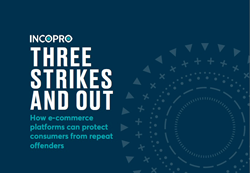 "I hope this study will inform and accelerate legislative change, driving a consistent approach to seller verification and sanctions for repeat illicit activity." -- Simon Baggs, CEO and co-founder of Incopro

A new study released today by online brand protection software provider, Incopro, has found that a core group of repeat sellers are responsible for a disproportionate share of illicit activity on online marketplaces and social sites. In the study, Incopro analyzed more than 1.5 million automated requests, sent on behalf of 750+ brands between November 2019 and November 2020, asking for illicit offers for sale to be removed across 34 global marketplaces and social sites. Incopro found that one in five of its automated requests to remove fake listings related to 3% of illicit sellers.

In the report, titled: “Three Strikes and Out: How Ecommerce Platforms Can Protect Consumers from Repeat Offenders,“ Incopro also explores the connection between repeat sellers of illicit goods and services and the monetary gain that could be secured if online marketplaces and social sites were to implement two baseline requirements: (1) all seller identities should be verified; and (2) all sellers should be removed from the marketplace or social site if identified as selling illicit goods and services on more than three occasions ("three strikes"). Implementing a uniform approach could significantly reduce illicit sales and save up to $78B of losses annually.

"With the pandemic driving an accelerated shift to online retail, it is critical that more is done to protect brands and consumers," said Simon Baggs, CEO and co-founder of Incopro. "We are seeing huge increases in brand misuse, a trend which has already caught the eye of legislators in the United States and Europe. I hope this study will inform and accelerate legislative change, driving a consistent approach to seller verification and sanctions for repeat illicit activity."

According to The Global Brand Counterfeiting Report, monetary losses suffered by the public due to online counterfeiting are estimated at $323B annually. If consumers are exposed to 11% fewer non-genuine offers on ecommerce platforms worldwide (per Incopro's findings above), this would amount to $35B saved -- and $78B saved with stricter policies. The equivalent revenue would also be captured by the true rights holders selling legitimate products and services.

Added Baggs: "Nearly two thirds of consumers lose trust in a marketplace after being deceived by a counterfeit seller, according to a recent Incopro consumer survey. Platforms have much to gain from instituting stricter measures that lead to the removal of repeat sellers of illicit goods and services, including a reduced admin workload and increased trust in their own brands."

The full report is now available for download at https://www.incoproip.com/reports/. Incopro will also host a webinar to address the research findings in the coming weeks.