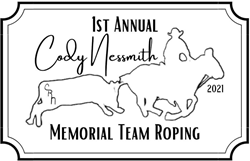 “One of the last times I saw Cody he told me that he wanted to have an event like this and did not want anyone keeping a dime, he wanted it all to go to help others,” said Colby Lovell.

The 1st Annual Cody NesSmith Memorial Team Roping will take place May 29-31 at the Leon County Expo Center. This event will be hosted by reigning PRCA NFR World Champion Roper and Cody’s close friend, Colby Lovell. Proceeds from the event will help launch the Cody NesSmith Foundation to help families whose children are battling cancer.

Cody was an avid team roper who was diagnosed with a rare bone cancer and lost his battle in July of last year. Based on his wishes, a foundation is being started in his memory to help others going through cancer treatment. The Foundation is chaired by Kay and Tony NesSmith.

“One of the last times I saw Cody he told me that he wanted to have an event like this and did not want anyone keeping a dime, he wanted it all to go to help others,” said Colby Lovell. “For a kid like that, going through what he was going through and just thinking about helping others, he was special.”

Cody was just 15 years old when he first met Colby at the USTRC Finals in Oklahoma City. It was then that Cody became a fan of Colby's roping. Nine years later they had a chance encounter at a Louisiana rodeo. This meeting led to a close friendship that would change the course of both their lives.

The two formed a lasting friendship, spending countless hours together roping and laughing at the Lovell’s ranch in Madisonville, Texas. It was there that the two trained together to help prepare Cody to rope in Las Vegas, a lifelong dream of his. Defying his doctor’s orders and medical odds, Cody returned to the arena and continued to live in the moment for the remainder of his days.

Cody’s courage and bravery in his battle with cancer inspired Lovell. This special friendship would give Colby the motivation he needed in his run for the PRCA NFR World Championship.

The upcoming event will feature open team roping and a ranch rodeo with working cowboys competing for cash and prizes. Tickets may be purchased at the gate starting at 6 PM.

If you would like to set up an interview with Colby or would like more information about The Cody NesSmith Foundation, please email media@crosswindpr.com.