The Green Economy Reports: Energy from Waves' Ebb and Flow

The Green Economy's latest magazine examines tidal energy having the potential to become a major source of energy in the near future. 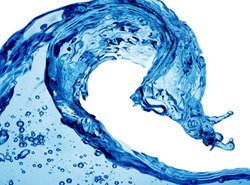 “There aren’t any areas in the world there couldn’t be applications for this technology.”

The Green Economy's latest issue on "Water, Clean and Plentiful" reports that tidal energy, energy collected from the ebb and flow of the tides, has the potential to become a major source of energy in the near future.

Recent developments with the technology have shown that tidal energy has more than just the advantages it shares with other forms of renewable energy: it solves the problems other technologies don’t.

In 2012, America’s first commercial tidal-power system began sending power to the grid. After years on the back burner, tidal power has emerged with new technology, making it possible for tidal energy to power homes and businesses.

Last August, Ocean Renewable Power Company installed a tidal-powered turbine in the Gulf of Maine’s Bay of Fundy. In September, the turbine — known as TidGen® — became the country’s first commercial tidal-power system to send power to the grid.

ORPC’s CEO and President, Christopher R. Sauer, believes tidal power has the potential to become a major power source for both the United States and other parts of the world. “There aren’t any areas in the world there couldn’t be applications for this technology,” Saur said.