Alex Schweder, a performance architect, has set up a consultation studio inside a Manhattan Mini Storage unit, in which he is conducting "performative apartment renovations" for volunteer subjects. 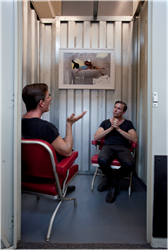 Alex Schweder at work in his Manhattan Mini Storage studio. (Photo illustration by the artist)

“Objects occupy a special place,” Schweder explains. “People pay not to throw them out. They can’t let go of them. So they become a satellite of the home.”

When people decide to store their most personal treasures, how does that change their living space? How do people negotiate their relationships to that changed space? And what can they do to stay connected to their belongings, even after they’ve been stored away?

Those are some of the questions New York-based artist Alex Schweder will be examining in his new conceptual art piece, entitled “Stored but Still Performed.” Schweder, who calls himself a “performance architect,” has set up a consultation studio inside a 5’ by 5’ by 8’ storage unit at a Manhattan Mini Storage location at 260 Spring Street, in Manhattan’s SoHo district.

In this space, which includes a sun-dappled view of Varick Street, Schweder has installed two office chairs facing each other, not unlike the set-up of a therapist’s office. Here he is conducting “performative apartment renovations” with his volunteer participants. Schweder begins by interviewing these urbanites about their apartments, and based on how the conversations unfold, he works with his clients to design new actions for their homes, with a focus on what they’re storing and how they can re-conceptualize their living spaces for optimal effect.

“Objects occupy a special place,” Schweder explains. “People pay not to throw them out. They can’t let go of them. So they become a satellite of the home.”

Schweder says that even after people remove physical belongings from their home, the emotional attachments remain. So he teaches subjects how to enact small rituals – or “performances,” as he calls them – to keep those connections intact.

“There are performances we do for ourselves that tell us who we are or who we want to become,” Schweder adds. So, for example, a person who stores her grandmother’s dishes might reenact one of the poses of the characters depicted in the pattern, so as to remain connected to the memories that the dishes embody.

Schweder is also welcoming members of the public who do not store with Manhattan Mini Storage to come in for renovations of their apartment that would be similarly performative. The artist has been renovating homes in this way since 2009, in an ongoing work titled “Its Form Will Follow Your Performance.”

“Imagine wanting to renovate your home,” Schweder says, “but you have next-to-no budget, your time in the unit is temporary, there is no possibility of expanding the physical limits of your space, and you are hesitant to contribute to the landfill. Many people living in dense urban environments put off renovating for any one of these reasons. My architectural practice suggests that a substantial change in your home can occur by merely by acting differently in it.”

Stacy Stuart, Executive Vice President of Marketing and HR for Edison Properties, the parent company of Manhattan Mini Storage, says Schweder’s project is a perfect fit with the company’s brand. “Alex’s work is fresh and edgy,” says Stuart. “But more importantly, we’re committed to making people feel secure in leaving their most personal belongings with us. So anything that helps them stay connected to their stuff is all for the better.”

Members of the general public who are interested in serving as subjects for “Stored but Still Performed” or “Its Form Will Follow Your Performance” can make an appointment with the artist via his web site, StoredButStillPerformed.com. One-on-one sessions will be conducted during regular Manhattan Mini Storage hours, and each session lasts about an hour. The project launches Oct. 16.

Alex Schweder is a New York-based artist whose work is self-described as “Performance Architecture.” His projects along these lines include “Practise Architecture” at the Tate Britain, “Flatland” at New York’s Sculpture Center, “Stability” at Lawrimore Project in Seattle, “Its Form Follows Your Performance” at Berlin’s Magnus Müller, “A Sac of Rooms All Day Long” at the San Francisco Museum of Modern Art, “Architectural Performances in Geologic Time” at the Chinati Foundation, “Counterweight Roommate” at Scope Basel, “Roomograph” at the deCordova Museum, “The Rise and Fall” at the 2012 Marrakech Biennial, “The Hotel Rehearsal” at the Biennial of the Americas, “Sometimes Ceiling” at the Lisbon Architecture Triennial and “Performance Architecture” at the 2013 Moscow Biennial.

Schweder has received funding from the Pollock-Krasner Foundation, the Graham Foundation, and is a 2005-6 Rome Prize Fellow. Schweder is the author of “Stalls Between Walls,” included in “Ladies and Gents: The Gendering of Public Toilets” (2009), and “Performance Architecture,” included in “Urban Interiors” (2011). He is a three-time artist in residence at the Kohler Company and was an artist in residence at the Chinati Foundation. Schweder has been a guest professor at the Southern California Institute of Architecture, the Institute for Art and Architecture in Vienna, Pratt Institute and the Architectural Association in London. He is currently pursuing his PhD in architecture at the University of Cambridge, in the UK, and is represented by Jack Hanley in New York.

You probably know them from their subway ads, but Manhattan Mini Storage is a lot more than funny slogans. They were the first self-storage company in Manhattan, opening their doors in 1978. They provide a full range of products and services to meet all their customers’ moving and storage needs and offer a complete package of free perks, including off-street parking,package acceptance, hanging rods and shelves in select rooms, box delivery for orders over $50 and their famous Storage Taxi, which picks up customers and their belongings anywhere in Manhattan. With 17 locations, Manhattan Mini Storage has become the neighborhood moving and storage solution for over 250,000 New Yorkers.

Edison Properties is the family-owned parent company of Manhattan Mini Storage, New York’s self-storage leader and one of the city’s favorite brands, thanks to their famous subway ads and billboards. They also own and operate Edison ParkFast – 40 garages and lots throughout New York City, as well as Northeastern New Jersey and Baltimore. Other properties include WorkSpace Offices, Executive Suites and Pre-Built Suites, The Hippodrome office building and The Ludlow, a luxury residential high-rise on the Lower East Side.