“The Physics of Friendship: A Tribute to The Big Bang Theory” 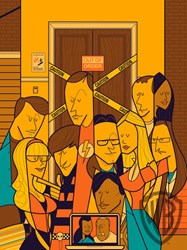 From October 19–November 10, 2013, Nucleus and Warner Bros. present “The Physics of Friendship: A Tribute to The Big Bang Theory,” an art exhibition featuring an international roster of visual talent capturing the equation of love, laughter and laboratories at the core of the super-smart hit show. Now in its seventh season, The Big Bang Theory (Thursdays 8/7c CBS) continues to perfect its winning formula, prompting this artistic tribute to its lovable cast of characters and their expanding universe.

The exhibit features more than 50 works in a variety of mediums by a roster of professional artists. To view a roster of artists, click here: http://www.bit.ly/bigbangtribute.

In addition to showcasing artwork inspired by the The Big Bang Theory, Gallery Nucleus will launch a pop-up shop featuring exclusive, limited-edition prints and merchandise featuring the art series.

To view a select preview of featured work from the exhibit, click here:

On Saturday, October 19, 2013, from 7–11pm, Nucleus hosts its “Physics of Friendship” Opening Night Exhibition & Fan Celebration, featuring a number of Big Bang–themed activities, including the following:

Transform Into an Action Hero

One lucky fan will win a custom-made action figure of his/her likeness. Details on how to enter for a chance to win will be posted at http://www.bit.ly/bigbangtribute.

About The Big Bang Theory
Leonard and Sheldon are brilliant physicists — geniuses in the laboratory, but socially challenged everywhere else. Enter beautiful, street-smart neighbor, Penny, who aims to teach them a thing or two about life. Despite their on-again, off-again relationship in the past, Leonard believes he's found true love with Penny. Even Sheldon has found a female companion, entering into a "Relationship Agreement" with neurobiologist Amy Farrah Fowler. In their free time, Leonard and Sheldon continue to enjoy frequent trips to the comic book store and fantasy role-playing games with their ever-expanding universe of friends, including fellow scientists Raj Koothrappali, Howard Wolowitz and Wolowitz's adorable microbiologist wife, Bernadette.

Now in its seventh season, The Big Bang Theory ranks as TV’s #1 entertainment series among Adults 18–49. It airs Thursdays at 8/7c on CBS as well as five nights a week in syndication. Johnny Galecki, Jim Parsons, Kaley Cuoco, Simon Helberg, Kunal Nayyar, Mayim Bialik and Melissa Rauch star in The Big Bang Theory, which was created by Chuck Lorre & Bill Prady, who also serve as executive producers along with showrunner Steve Molaro. The Big Bang Theory is from Chuck Lorre Productions, Inc. in association with Warner Bros. Television.

BIG BANG THEORY and all related characters and elements are trademarks of and © Warner Bros. Entertainment Inc.
(s13)

About Nucleus
Since October of 2004, Nucleus has strived to be a welcoming gathering place for the art loving community by offering quality art, art-related goods, and rarities. Focusing primarily on gallery exhibits, we have also had benefit auctions, product signings, music events, and artist lectures. After three and a half years, we moved one block east to a much larger and more dynamic space. Still in the heart of quaint downtown Alhambra, we re-opened in March of 2008 with over 2000 square feet of open gallery space, 1000 square feet of shop/boutique, and over 3000 square feet of studio/production space. Having exhibited both local artists and artists from abroad, and catering to an international customer base, we offer an extensive collection of original contemporary, illustrated, graphic, commercial, and narrative art - all of which are carefully catalogued on our website – http://www.gallerynucleus.com