Designer to the stars, Lloyd Klein created the buzz with sizzling singing sensation Ivy Levan announcing her as his creative muse and kick-starts the Spring 2014 Fashion Season Preview in LA. 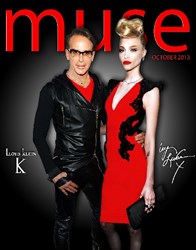 Ivy Levan is my Audrey Hepburn.

Couturier and personality, Lloyd Klein, kicked off Los Angeles Fashion Week escorted by his latest fashion muse, Interscope recording artist Ivy Levan. The designer and his muse kicked-off Fashion season in LA with Designers Night Out which was held at the Sofitel Hotel In Los Angeles on Thursday, October 3rd, 2013. Ivy turned heads wearing a crimson red jersey and black lace cocktail dress that the designer created specifically with her in mind and it was the hit of the evening. Klein announced the talented femme fatale as his Muse for his new collection for LKLA - Lloyd Klein Los Angeles.

“Ivy Levan is the epitome of the woman who I have designed for my entire career. She is equal parts super model, greek goddess and superstar combined. She is literally this designer’s dream come true”. Lloyd Klein quoted on the red carpet at the LA Fashion Week kick-off party .

The fairytale like duo of Audrey Hepburn and the legendary Monsieur Hubert de Givenchy is probably the most noted “Muse to Designer” relationship in fashion history. According to legend, when the young Hepburn, an up-and-coming ingénue at the time, arrived at the designers atelier to discuss her costumes for Sabrina, he nearly refused to meet with her once she arrived, because he had expected a meeting with Katherine Hepburn. But the future Style Icon, Hepburn charmed the designer within minutes and sparked a close rapport with him becoming his fashion muse until her death from cancer in 1993.

Similarly, Lloyd Klein thought that the internet link sent to him by his business partner was to see the outcome of a dress worn by a model in an Adam Levine, Maroon 5 video turned out to be Ivy Levan’s video in which she wore the designer’s gown in a clever scene shot on Rodeo Drive. Klein was smitten by the emerging artist instantly.

“Ivy Levan is my Audrey Hepburn.”

In a text to Klein’s business partner, John Arguelles.

In addition to her hit video entitled HOT DAMN and her recently released album cover for INTRODUCING THE DAME, Lloyd Klein is sketching and collaborating with his muse for her appearances and performances while he is creating his new ready to wear collection for Spring 2014.

Lloyd Klein hails from the world of couture in Paris where among other significant milestones he was the head designer for the legendary Madame Grės Fashion House. Since opening new headquarters in Los Angeles he has become best known as a “designer to the stars.” Among the designer’s other Muses are legends like Natalie Cole, Faye Dunaway and Joan Collins as well as his next-gen inspirations embodied by Annalynne McCord, Brandy Norwood and Marissa Miller.