What Caused the Big Bang? A Master Mason and Knight Templar Offers a Unique New Approach to Multiverse Cosmology

Jeffrey Augustine is a Master Mason and a Knight Templar. In answering the question "What caused the Big Bang?" his new book offers a radical new approach to Multiverse Cosmology and Consciousness. 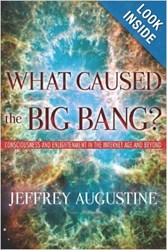 "What Caused the Big Bang? The answer is breathtaking!"

What caused the Big Bang?

In his new book, Jeffrey Augustine boldly answers this question. In doing so, he offers powerful new insights into the nature of Consciousness and Multiverse Cosmology.

"In the pages of "What Caused the Big Bang?, I introduce a striking new cosmology that transcends the models of Divine Creation and a spontaneous Big Bang that had no cause."

"My book is written for people who are spiritual but not religious, who respect science but are not atheists," Augustine noted. "If you have no use for the creation story in the Bible and likewise find the claim that the Big Bang just 'spontaneously happened' to be unconvincing, then you may indeed like what my book has to offer."

"I worked in the scientific arena, in high tech, for thirty years, so I respect science, but I reject the idea that to be 'scientific' means that one must also be an Atheist."

"I worked professionally with light, literally with photons, colors, plasma, lasers, and optics for decades while simultaneously working in very intense spiritual disciplines such as Buddhism, Advaita Vendata, and Freemasonry. I never experienced a sense of contradiction. Rather, I saw and vividly experienced an underlying logic and inexorable process at work that I describe in my book."

A central premise in Jeffrey Augustine's work is that Infinity is a monolithic Unity. It is One. Augustine's distinctive cosmology states that all universes are sub-infinite and are "sourced" by Infinity.

Once sourced, Infinity launches these sub-infinite universes into the Multiverse in a "high-energy faster than light transfer process" that Augustine calls "Disunification."

About the Author: Jeffrey Augustine is a Master Mason and a Knight Templar. He is also a noted critic of the Church of Scientology. A scientific lighting expert by profession, Augustine has worked on lasers, medical devices, UV-C water treatment, and even lighted the prototype of a space vehicle. The author lives in Los Angeles with his wife Karen de la Carriere, an extraordinary woman who was once a very high ranking member of the Church of Scientology.