Gates is targeting the electric bike market, which is the fastest-growing category for its bicycle belt drives. 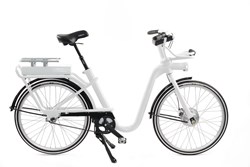 Gates Carbon Drive simply makes sense on electric bikes because it provides a clean, grease-free and low-maintenance alternative to chains and derailleurs.

Continuing its push into the electric bicycle market, Gates Corporation, maker of the Gates Carbon Drive™ system for bicycles and eBikes, has joined the Light Electric Vehicle Association (LEVA), the world’s largest and most influential trade association for electric bikes.

Gates, which joined LEVA as a Bronze level sponsor, will work with LEVA to help grow the market for electric bikes and partner with the group to alert consumers and manufacturers about the benefits of belt drives on eBikes. Joining LEVA and its network of over 250 members in 29 countries is the latest step in Gates Carbon Drive’s effort to support the emerging eBike market.

More than a million electric bikes were sold in Europe in 2012, and that number is expected to double in 2014. In the United States, sales topped 100,000 last year and LEVA expects that will double in 2013. Sales could hit 40 million worldwide in 2015, according to the annual Electric Bike Worldwide Report written and published by Dr. Frank Jamerson.

“Electric bikes are transforming the bicycle industry and providing people around the world with an efficient, sustainable and affordable form of transportation,” said Frank Scurlock, global sales director for Gates Carbon Drive. “LEVA is giving this industry a voice and is doing great work to educate the public, bicycle brands and policymakers about the benefits of electric bikes.”

To educate LEVA members about Carbon Drive, Gates will partner with the trade association to provide seminars, training and technical information about belt drives on eBikes. “Gates Carbon Drive simply makes sense on electric bikes because it provides a clean, grease-free and low-maintenance alternative to chains and derailleurs,” Scurlock said.

Gates is now working with Yamaha, NuVinci and Panasonic to provide sprockets for their eBike systems. “Our goal is to have a Gates belt drive option for every eBike motor in the market,” said Todd Sellden, director of Gates Carbon Drive.

Other growth initiatives this year include a new website to promote the “clean, quiet, light and strong” advantages of Gates Carbon Drive. The company has also added multiple employees in Europe, the United States and Asia to beef up sales, engineering and technical support. Gates recently introduced its own branded cranksets that come pre-assembled with Carbon Drive sprockets, saving bike makers the time and expense of sourcing and installing cranks separately.

"We are impressed with the growth of Gates Carbon Drive on eBikes and intrigued with the technology because it offers consumers and manufacturers a nice alternative to chain drives,” said Heather Marshman, LEVA executive director. “We think Carbon Drive's quality and attributes can help attract new consumers and boost sales of electric bicycles. And that's what it's all about: getting more people on light electric vehicles.”

About Gates Carbon Drive™
Consisting of two lightweight metal sprockets and a high-strength belt embedded with carbon fiber cords, Gates Carbon Drive™ is a low-maintenance, chain-replacing technology from Gates Corporation, the global leader in automotive and industrial belts. Clean, quiet, light and strong, Carbon Drive requires no greasy lube, weighs less than a chain drive and will not stretch. Due to its low maintenance and ease of use, Carbon Drive is a technology that can get more people on bikes. Gates Carbon Drive will be featured on more than 220 bike models from more than 90 brands in 2014. Visit http://www.gatescarbondrive.com.

About LEVA
With more than 250 members in 29 countries, the Light Electric Vehicle Association (LEVA) represents the strategic interests of light electric vehicle retailers, dealers, distributors, manufacturers and suppliers to promote the development, sale, and use of LEVs worldwide. http://www.levassociation.com/