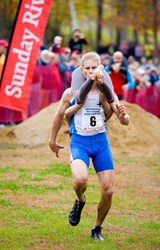 High resolution images and b-roll of today’s race and champion couple are available to download at: http://bit.ly/sundayrivermedia.

Miettinen and Sairanen won the 278-yard obstacle race with a time of 48.19 seconds beating second place finishers, Chris Poirier from Waterville, ME and Cristyn Peters from Strafford, NH.

Poirier and Peters finished the final heat with a time of 51.48 seconds.

In addition to the 2013 North American Wife Carrying Championship title, Miettinen and Sairanen take home cash equal to five times her weight ($445) as well as her weight in beer.

Today was Sairanen’s first time ever racing with Miettinen and her first time competing in any wife-carrying event.

Sunday River’s North American Wife Carrying Championship drew in 50 competing couples from all over the world including South Korea, Finland, and Canada.

About Wife Carrying:
Wife carrying is a sport where male competitors race while each carrying a female teammate. The objective is for the male to carry the female through an obstacle track in the fastest time. The sport of wife carrying was first introduced in Sonkajärvi, Finland.

During today’s NAWCC, couples navigated a 278-yard course that included such obstacles as a three-foot high log hurdle, a small pond, and a sand trap.

Registered teams did not need to be legally married, but did need to be comprised of a man and a woman. Both competitors had to be over the age of 21.

Carrying form is the competitors’ choice, though most use the Estonian carry where the wife holds her husband around his waist and tightens her legs around his neck, thereby freeing the husband’s hands.

In the 14 years that Sunday River has held this national event, all first place finishers have used the Estonian carry including today’s winners, Miettinen and Sairanen.

About Sunday River Resort—A true four-season destination, Sunday River offers eight interconnected peaks of world-class skiing and snowboarding, two Resort Hotels, and golf at the highly acclaimed Sunday River Golf Club. Sunday River is a member of the Boyne USA Resorts family of resorts and attractions and is located in Newry, Maine, amidst the scenic Mahoosuc Range. Follow us: http://www.sundayriver.com http://www.facebook.com/sundayriver and @sundayriver.
###