Geppetto's Skate Shop - Olympic hopefuls: figure skaters can experience a variety of injuries throughout their skating careers, many of which could have been avoided all together. New book, Anatomy of a Figure Skating Injury has all the answers. 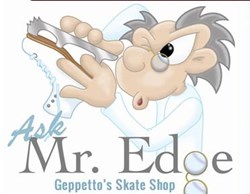 Changing the Way the World Skates, One Skater at a Time!

Ice skaters worldwide have been struggling with recurrent injuries for decades. Unlike other sports, figure skating has no governing body to manage the development of guidelines for skating equipment, i.e. a skater’s skates. After more than three decades of working with competitive figure skaters, John Harmata, aka Mr. Edge, has documented the relationship between proper boot fit, blade mounting, sharpening and the role each of them can play in causing injuries to skaters. In his new book “Anatomy of a Figure Skating Injury,” Harmata addresses the problems involving foot mechanics and explains why so many skaters are still prone to injuries and how to reduce or avoid them altogether.

“The skating instructor is the first person to whom the skater or skating parents turn to for advice before purchasing a good pair of figure skates,” says Harmata. The information contained in “Anatomy of a Figure Skating Injury” gives them all that and much more. The book is now available in print at Amazon.com and Barnes & Noble bookstores.

John Harmata is the president of Arena Sports & Consulting Services, Inc. dba Geppetto’s Skate Shop. Harmata has worked in many different areas of the figure skating industry for more than three decades. During those years, he has served as a consultant to Danco Sports, Inc., Harlick Boot Company, Paramount Skates, and was also asked to consult on a special project for the National Hockey League. Since 2000, his Ask Mr. Edge column has been featured in US Figure Skating’s “SKATING” magazine, educating coaches, parents, skaters and skate technicians worldwide.

Harmata was born and raised in Chicago, Illinois and holds a degree in X-ray Technology. While attending numerous skating competitions and trade shows, including World’s in 1987, it became apparent to him that something should and could be done to reduce the amount of injuries figure skaters are prone to. In the years that followed, he had perfected his fitting technique and began submitting suggestions to boot manufacturers on ways to improve the overall fit and comfort of their boots.