Pool Together for a Great Person

Famous pool player Janet Atwell comes down with breast cancer and two top brands in the billiard industry, GoPlayPool.com and KamuiTips.com pool together to raise money for her. 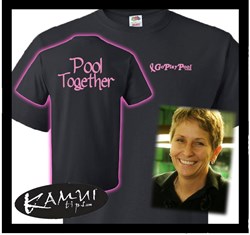 We're in a position to help her, and that's exactly what we want to do.

Janet Atwell grew up in Abingdon, VA with her younger brother and parents. They owned a market which, for a short time, even featured a coin-operated bar box. Years later, her love for the game would come back to her, and in 1999, Janet played in her first professionally sanctioned tournament. In 2004, she officially became a professional female pool player, and has even opened her own pool hall called Borderline Billiards in Bristol, TN. Janet has been an active member of the women's billiard community for a while now, and has made an impact on her fellow players and fans of the sport. Placing well in professional events and even winning titles such as the 2013 Virginia Women's 10-Ball Championships, Janet has definitely made a positive mark in the world of women's pool.

GoPlayPool.com has teamed up with Kamui Tips to raise funds that will help Janet with medical costs since she is uninsured while she undergoes the cancer treatments. Available at: http://POOLTOGETHER.GOPLAYPOOL.COM, people can purchase 2 different packages in which a portion of the proceeds will go to help Janet. One package is valued at $22.00 and contains a GoPlayPool.com t-shirt and patch. This package is being sold for only $15.00 and $5.00 of that will go directly to Janet. The second package contains a GoPlayPool.com t-shirt and patch, a Kamui patch and a voucher for a Kamui tip. The voucher for the Kamui tip alone is retailed at $25.00 and the entire package would retail for $50.00. This package is available for a very reasonable $30.00 with $20.00 of that going directly to Janet. Plus, if you just want to “donate to Janet” directly, that option is available as well.

Janet was diagnosed with breast cancer and had to undergo a very sudden double mastectomy. Within a short time, she went from being undiagnosed to starting her first round of chemotherapy. Janet is now looking at multiple rounds of treatments before she will find out whether or not she has beaten the cancer. However, her positive outlook on life continues to show why she's been successful in the world of pool and in life.

Mary Ann Starkey, owner of GoPlayPool.com said "We are so happy that we are able to help Janet in any way we can. She is such a positive person, and we were shocked when we learned of her diagnosis and the sudden treatments that she would have to go through. Having recently seen a family member battling cancer, when I learned of Janet's diagnosis it touched me personally. We're in a position to help her, and that's exactly what we want to do. I really hope that our efforts will help ease the financial burden on Janet so she can focus on recovering and becoming cancer-free."

If you would like more information about the charitable packages being offered, you can visit http://POOLTOGETHER.GOPLAYPOOL.COM.

GoPlayPool has also created a tab on their free app which is available on iOS and Android. GoPlayPool would like to thank Mr. John Bertone and Kamui Tips for joining in our efforts to raise funds for Janet. The contribution is greatly appreciated.