12 of our local Goth girls are included in this first of it's kind Vampirefreaks calender featuring some of our most photogenic darkly aesthetic women in Gothic environments sure to please for the Halloween season. 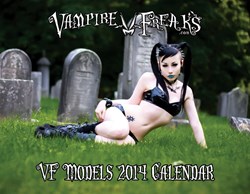 When it includes Goth girls, it can't be morbid!

With one of the largest catalogs of Goth and alternative models, Vampirefreaks is proud to introduce a select group of Goth girls in it's 2014 Lingerie Calender. Taken in locations that would make any darkly oriented aesthetic individual comfortable, the calender features the following models;

Part of our effort within the greater social system, is to reflect Goth girls in a sophisticated, elegant light to wash-away many of the stereotypes that have risen over the years about the Goth culture. While it isn't recommended for children, it is tastefully photographed by Candylust.org, one of the premier alternative photographers in the Northeast.

About Vampirefreaks.com: VF was founded over 13 years ago by software engineer and computer programmer Jet Berelson. Jet wanted to create a safe place for Goth’s of all kinds to interact with each other without being judged. With over 12,500 musician and bands profiles, along with a focus on dark art / illustration, fashion and related lifestyle items,Vampirefreaks has become the largest and most influential online alternative community. Members and fans have numbered over 7.3 million since inception and this large community continues to demand live events, support for Goth issues and content as well as a population of with like interests to interact within.

The Vampirefreaks 2014 Goth girl Lingerie Calender12 Goth girl models in lingerie for 2014. It's all good!