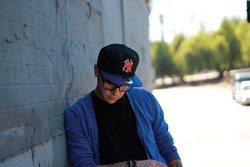 Colleges and specialty radio are still as critical as they were 10 years ago in reaching listeners who are open to new things and new ideas...

Looking to add to what has already been a big 2013, Los Angeles-based artist and film composer CUSCINO is set to release his debut EP, ‘Eternality', this Tuesday, October 29th. The EP will be unveiled on Los Angeles-based label Fashion Sells Musiq everywhere digital music is sold.

A diverse, emotionally ranging offering designed to take listeners on a visceral, visual journey of sound, CUSCINO will be going for adds Monday, October 28 and Tuesday, October 29 nationwide at college, satellite, Internet and specialty radio. “For artists being introduced to the world in today's digitally-driven landscape," says CUSCINO, "it is important to be able to reach the right audience, and the right ears. For me, colleges and specialty radio are still as critical as they were 10 years ago in reaching listeners who are open to new things and new ideas, both sonically and otherwise.

"I am thankful to have the opportunity to work with the same team that's driven national radio pushes for Franz Ferdinand, M83, Kishi Bashi, Norah Jones, Elf Power, Sufjan Stevens and more. It couldn't be a better fit."

CUSCINO works to string together disparate sounds and blend them together in the pursuit of organic and inorganic harmony. For some, ‘Eternality’ might fall under the EDM genre umbrella, but the tracks on this outing intentionally blur the lines of a standard EDM offering, placing CUSCINO exactly where he wants to be: somewhere on the outside.

Receiving play on college and speciality radio isn’t the only place you can find CUSCINO’s work. In addition to the release of ‘Eternality’, fans of CUSCINO’s music can check out his work at film festivals and, eventually, theaters. He has already been tapped as composer on several films – both locally and abroad in the UK – with several more on tap for 2014. But for a more immediate exposure to his sound, pre-order, exclusive early-download offers and physical editions of ‘Eternality’ are available at Bandcamp and Amazon.