Scientists have fingerprinted a distinctive atmospheric wave pattern high above the Northern Hemisphere that can foreshadow the emergence of summertime heat waves in the United States more than two weeks in advance. The new research, led by scientists at NCAR, could potentially enable forecasts of the likelihood of U.S. heat waves 15-20 days out, giving society more time to prepare for these often-deadly events. 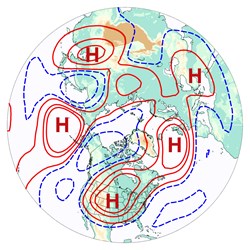 This brings us hope that the likelihood of extreme weather events that are damaging to society can be predicted further in advance.

Scientists have fingerprinted a distinctive atmospheric wave pattern high above the Northern Hemisphere that can foreshadow the emergence of summertime heat waves in the United States more than two weeks in advance.

The new research, led by scientists at the National Center for Atmospheric Research (NCAR), could potentially enable forecasts of the likelihood of U.S. heat waves 15-20 days out, giving society more time to prepare for these often-deadly events.

The research team discerned the pattern by analyzing a 12,000-year simulation of the atmosphere over the Northern Hemisphere. During those times when a distinctive “wavenumber-5” pattern emerged, a major summertime heat wave became more likely to subsequently build over the United States.

“It may be useful to monitor the atmosphere, looking for this pattern, if we find that it precedes heat waves in a predictable way,” says NCAR scientist Haiyan Teng, the lead author. “This gives us a potential source to predict heat waves beyond the typical range of weather forecasts.”

The wavenumber-5 pattern refers to a sequence of alternating high- and low-pressure systems (five of each) that form a ring circling the northern midlatitudes, several miles above the surface. This pattern can lend itself to slow-moving weather features, raising the odds for stagnant conditions often associated with prolonged heat spells.

The study is being published next week in Nature Geoscience. It was funded by the U.S. Department of Energy, NASA, and the National Science Foundation (NSF), which is NCAR’s sponsor. NASA scientists helped guide the project and are involved in broader research in this area.

Heat waves are among the most deadly weather phenomena on Earth. A 2006 heat wave across much of the United States and Canada was blamed for more than 600 deaths in California alone, and a prolonged heat wave in Europe in 2003 may have killed more than 50,000 people.

To see if heat waves can be triggered by certain large-scale atmospheric circulation patterns, the scientists looked at data from relatively modern records dating back to 1948. They focused on summertime events in the United States in which daily temperatures reached the top 2.5 percent of weather readings for that date across roughly 10 percent or more of the contiguous United States. However, since such extremes are rare by definition, the researchers could identify only 17 events that met such criteria—not enough to tease out a reliable signal amid the noise of other atmospheric behavior.

The group then turned to an idealized simulation of the atmosphere spanning 12,000 years. The simulation had been created a couple of years before with a version of the NCAR-based Community Earth System Model, which is funded by NSF and the Department of Energy.

By analyzing more than 5,900 U.S. heat waves simulated in the computer model, they determined that the heat waves tended to be preceded by a wavenumber-5 pattern. This pattern is not caused by particular oceanic conditions or heating of Earth’s surface, but instead arises from naturally varying conditions of the atmosphere. It was associated with an atmospheric phenomenon known as a Rossby wave train that encircles the Northern Hemisphere along the jet stream.

During the 20 days leading up to a heat wave in the model results, the five ridges and five troughs that make up a wavenumber-5 pattern tended to propagate very slowly westward around the globe, moving against the flow of the jet stream itself. Eventually, a high-pressure ridge moved from the North Atlantic into the United States, shutting down rainfall and setting the stage for a heat wave to emerge.

When wavenumber-5 patterns in the model were more amplified, U.S. heat waves became more likely to form 15 days later. In some cases, the probability of a heat wave was more than quadruple what would be expected by chance.

In follow-up work, the research team turned again to actual U.S. heat waves since 1948. They recognized that some historical heat wave events are indeed characterized by a large-scale circulation pattern that indicated a wavenumber-5 event.

The research finding suggests that scientists are making progress on a key meteorological goal: forecasting the likelihood of extreme events more than 10 days in advance. At present, there is very limited skill in such long-term forecasts.

Previous research on extending weather forecasts has focused on conditions in the tropics. For example, scientists have found that El Niño and La Niña, the periodic warming and cooling of surface waters in the central and eastern tropical Pacific Ocean, are correlated with a higher probability of wet or dry conditions in different regions around the globe. In contrast, the wavenumber-5 pattern does not rely on conditions in the tropics. However, the study does not exclude the possibility that tropical rainfall could act to stimulate or strengthen the pattern.

“There may be sources of predictability that we are not yet aware of,” she says. “This brings us hope that the likelihood of extreme weather events that are damaging to society can be predicted further in advance.”