Despite the predominance of men on paranormal investigation teams in reality shows, recent study indicates that a higher percentage of women than men believe in the paranormal. The study was conducted by Queendom.com and PsychTests.com with 22,320 people who took their Paranormal Beliefs Test. 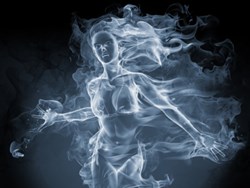 Women are more receptive to the existence of spirits or angels, while men are betting on aliens.

Just because something cannot be proven through scientific methods, it doesn’t mean it’s impossible.

The Travel Channel’s “Ghost Adventures” has investigators Zak, Nick, and Aaron traveling all over the world investigating some of the most notoriously haunted locations. Animal Planet’s “Finding Bigfoot” has three male investigators determined to prove to everyone – including their skeptical female teammate - that Sasquatches exist. And the list goes on.

However, research by Queendom.com indicates that women are still more likely to believe in the paranormal than men. This is a conclusion of a study conducted by Queendom.com and PsychTests.com between 2008 to 2010 with 22,320 people who took their Paranormal Beliefs Test.

The term “old wives’ tales” says it all. Even “female intuition” has become a catchphrase. Women just seem to have an inexplicable connection to the unknown, the unexplainable, and the mysterious.

So despite the continued rise of reality shows with men investigating ghosts and other things that go bump in the night, data collected by researchers at Queendom.com indicate that women are more likely to believe in paranormal or mystical phenomena including:

Women were also more likely to believe in the possibility of:

In addition, 42% of women report having first-hand experience with paranormal phenomena (e.g. seeing a ghost) compared to 33% of men. The only area where men have a stronger belief than women relates to the existence of aliens (43% of men vs. 36% of women), conspiracy theories that the government is hiding proof of alien existence (40% vs. 36%), and the possibility of life on other planets (70% vs. 58%).

“Men typically pride themselves in being more rational. They are practical, and rely on reason and logic – they want evidence to prove theories. So the possibility of there being life on other planets makes more sense, theoretically and mathematically, than the existence of spirits, for example – despite the great technological advances in parapsychology,” points out Dr. Jerabek, president of the company. “The vastness of the universe lends credence to the possibility that we are not alone, not to mention the fact that NASA has spent millions of dollars investigating – and discovering – other planets that have all the basic requisites to sustain life.”

“Women, on the other hand, have been shown in several studies to be more in touch with their emotions, and to a greater extent, their intuition. They are not afraid to trust and follow their gut feelings, even if they don’t have any solid proof or facts to base this decision on – when something doesn’t feel right they listen to that inner warning. This is perhaps why women are more receptive to the existence of spirits or angels. Just because something cannot be proven through scientific methods, it doesn’t mean it’s impossible.”

“It’s not that one gender is more open-minded than the other – it’s a matter of different perspectives on paranormal possibilities,” concludes Dr. Jerabek.

Interested in finding out how you compare to others when it comes to the metaphysical, occult, and other mysterious phenomena? You can take the Paranormal Beliefs Test at: http://www.queendom.com/tests/take_test.php?idRegTest=710.

70% of men 58% of women believe in the possibility of life on other planets.40% of men and 36% of women endorse conspiracy theories that the government is hiding proof of alien existence.

Women are more receptive to the existence of spirits or angels, while men are betting on aliens.42% of women report having first-hand experience with paranormal phenomena (e.g. seeing a ghost)