Iwo Jima Saved US Government from a Different Kind of Shutdown in World War II, AMERICA IN WWII Publisher Says

Nearly 70 years ago, the government was running out of money to finish World War II and war-weary Americans weren’t sure they could muster a bailout. As marines planted the flag on Iwo Jima, the war effort faced a possible shutdown. 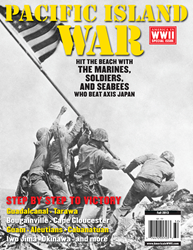 US marines raise the flag on Iwo Jima's Mount Suribachi on February 23, 1945, in the famous photo by Joe Rosenthal--seen here on the cover of PACIFIC ISLAND WAR.

The lack of funds had the potential to cause a shutdown or at least a downsizing of the war effort.

World War II was the costliest war America had ever fought. It sprawled across the globe, sending US servicemen in every direction. It required new weapons, ships, vehicles, airplanes, electronics, and equipment, all in huge quantities. Some 11 million men served in the armed forces in the war, and they had to be fed, clothed, and cared for. "The cost of doing all that was staggering," said Jim Kushlan, publisher of AMERICA IN WWII magazine. "It threatened to bankrupt the nation."

Kushlan, who recently finished work on his magazine’s Fall 2013 special issue, PACIFIC ISLAND WAR, says the problem was serious. "Sending, say, a new aircraft carrier halfway around the world, arming and manning it, and keeping it afloat cost a fortune."

To fund this expensive war effort, President Franklin D. Roosevelt’s administration promoted the sale of war bonds to the American public in seven separate war loan campaigns. In the first six drives, Americans contributed upwards of $109 billion. "But it didn’t even come close to covering the war’s costs," commented Kushlan, "and by the start of 1945, that was a problem."

As 1945 opened, American morale was running low. The staggering casualties in the war against Japan shocked civilians on the US home front. That was what Imperial Japan’s strategists intended, says Kushlan. He points to a quote in an article by author Brian John Murphy in PACIFIC ISLAND WAR: "America invaded islands that put bombers closer to Tokyo and deprived Japan of bases and supplies. Japan exacted a bloodbath at every step, hoping Americans would lose heart."

"It was working," says Kushlan. "Americans were starting to lose the certainty of victory, and that endangered the government’s ability to raise enough money to keep going with the war." The lack of funds had the potential to cause a shutdown or at least a downsizing of the war effort. That could have made the war stall out and drag on, possibly ending with a negotiated settlement with Japan’s Axis leadership rather than an unconditional surrender of the island empire.

In the end, an inspiring photograph saved the day. Associated Press photographer Joe Rosenthal’s shot of five US marines and a navy corpsman raising the Stars and Stripes on Mount Suribachi on Iwo Jima, on February 23, 1945 (actually the second US flag raised there that day), "changed everything," says Kushlan.

"That image of hard-fighting American boys planting the colors so close to Japan" gave the US government what it needed to stir the home-front population—just in time for the Seventh War Loan drive. Starting on May 14, 1945, in six weeks it raised more than $26 billion. The drive’s materials used the Rosenthal Iwo Jima photo on its materials, and three of the flag-raisers were sent on a nationwide promotional tour.

"That’s how a potential ‘government shutdown’ of sorts was avoided nearly 70 years ago," Kushlan says.

AMERICA IN WWII is a bimonthly magazine about the American experience in the Second World War—the war, the home front, and the people. It is available at Barnes & Noble and Books A Million stores, and select other bookstores. PACIFIC ISLAND WAR, the magazine’s Fall 2013 special issue, is available on bookstore and digital newsstands, and by direct order from the publisher.

Subscriptions to AMERICA IN WWII's print edition are available at 1-866-525-1945 (toll-free). Readers can also find digital editions for any device by searching for "america in wwii" on their devices’ app stores, or by visiting http://www.AmericaInWWII.com/subscriptions/ (print subscriptions can also be purchased there).

The Iwo Jima flag-raisers appeared on posters promoting the Seventh War Loan, a desperate bid to avoid a shutdown or downsizing of the war effort in 1945. AMERICA IN WWII COLLECTIONSeventh War Loan poster

The flag-raisers of Iwo Jima also appeared on a three-cent postage stamp in 1945, part of an all-out effort to re-inspire the American people to fund and finish the war. AMERICA IN WWII COLLECTION1945 Iwo Jima stamp

Wartime Americans could keep track of their war bond investments with a stamp card like this one. Small war bond stamps purchased on paydays steadily added up to help fund the US war effort. AMERICA IWar bond stamp card