Award-winning South Carolina writer Phillip Gardner has a new anthology of short stories published today from Boson Books/Bitingduck Press. “Available Light” may be purchased in both print and electronic formats, including as a discounted bundle from Amazon’s Matchbook program. 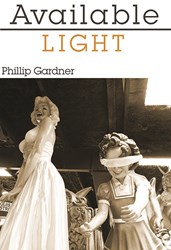 Phillip Gardner is in the first tier of the South’s finest short story writers.

Three-time South Carolina Fiction Project winner Phillip Gardner explores love, loss, and reconciliation in his third short story anthology. Available today from all major distributors, including Amazon’s MatchBook program, “Available Light” is a tragi-comic exploration of relationships between husbands and wives, boyfriends and girlfriends, parents and children, and brothers and sisters. The richly drawn, often eccentric characters often struggle to express their love, but all are eventually able to follow a path illuminated by whatever light is available to them.

In “Get Drunk and Screw,” a man attributes his wife’s altered behavior to infidelity, until a call from her oncologist unveils the grim truth. “Like a Little White Chapel on the Beach” features a 15-year-old girl with a much older boyfriend, a pair of worried parents, and an eerie stalker. The hero of “Winner Take Nothing” finds he is not the father of his girlfriend’s little boy, but that the child needs him anyway. The awkward moments of childhood, adolescence, and adulthood are all featured in this diverse cast within their vivid Southern and Southwestern settings.

Thirteen of the stories included have been published in journals or magazines with national and international circulation or are contest winners. Ron Rash, author of "Serena" and "One Foot in Eden," says, “This new collection leaves no doubt that Phillip Gardner is in the first tier of the South’s finest short story writers. His empathetic imagination, vivid language, and understanding of what makes a memorable story are of the first order. His voice is utterly his own. Available Light takes the reader beyond the realm of pain and pleasure and into the sublime.”

This is Phillip Gardner’s third short story collection, after Someone To Crawl Back To (2003) and Somebody Wants Somebody Dead (2012)(Boson Books). Gardner teaches at Francis Marion University. A publisher of electronic books since 1994—one year before Amazon—Boson Books is among the first publishers to subscribe to Amazon’s “MatchBook” program, where subscribed titles will be offered as e-books for low or no cost to purchasers of the print edition. All of Gardner’s books are also available as a bundle of electronic formats (Kindle, epub, pdf) from the publisher’s webstore.

Boson Books was acquired in 2012 by Bitingduck Press, a Los Angeles-area publisher founded in 2012 by two physicists. Bitingduck Press aims to carry forward the spirit of innovation that led the creators of Boson to launch e-books while the World Wide Web was still in its infancy. Dubbing itself the “World’s Greenest Press,” Bitingduck believes that books should serve local businesses and the environment as well as readers. E-books are environmentally friendly, but usually not sold in local stores. Bitingduck is changing this with a program called WebBytez, where cards linked to downloadable books can be sold in any store, giving the store the same amount of credit as the sale of a print book. The press has WebBytez distribution agreements with several independent bookstores in California, and is looking to branch out to stores across the nation. More information for interested bookstores and authors may be found on the publisher’s website.